Raziel Gonzalez ‘12 blends his passions for brewing and music

“It’s a Kölsch style beer, a kind of easy-drinking ale from Cologne, Germany, very similar to lagers and pilsners, but with a little bit more frutiness to it,” explains Gonzalez, an assistant brewer and tap room manager, who crafted the beer from conception to finished product alongside Harmonic co-founders Eddie Gobbo and Eric Tisch. The beer, he says, “is crisp, clean, not super experimental and beautiful in its simplicity.”

In creating Salonen’s beer Gonzalez and the team at Harmonic sought to mirror the kinds of things Salonen, or any performer and audience member, might like to drink after a concert.

“If you finish a performance, or any sort of activity that takes a lot of mental energy, you want a [drink] that’s crisp and clean, so much so that you feel like you can drink a million of them,” says Gonzalez, who has first-hand knowledge of that experience from his years as a classical guitarist—the other of his great passions and the one that originally brought him to San Francisco and to SFCM.

Falling in love with classical guitar changed Raziel’s life.
Raziel caught the electric guitar bug early. Growing up in Corpus Christi, Texas (famous for being the birthplace of musician Selena—and Raziel proudly wears a Selena pin on his jacket), Raziel’s family played instruments, and he asked his dad to buy him drums so he could compete. His dad gave him a guitar instead. Raziel found himself playing a bunch of punk rock and metal, but that all changed in high school.

“My guitar teacher put Bach’s Prelude in D Minor, BWV 999 in front of me and said, ‘I bet you can’t play this,’” recalls Gonzalez. Challenge accepted, Gonzalez learned to play the piece, and he was hooked. “It started this huge explosion of learning pieces—by Francisco Tarrega, Isaac Albeniz, Bach, of course—and I fell very radically in love with classical guitar. Five, six months in, I was just a classical guitar player.”

Soon, it became his goal to study guitar in college, but he didn’t dream it’d be possible to do so at SFCM.

“One of the books I learned guitar from was Lawrence Ferrara’s student repertoire volume one, and Larry taught at SFCM,” says Gonzalez. “As I was applying, I didn’t think that I’d get in and get to learn with this guy whose book had taught me guitar—and the idea of moving to San Francisco was foreign to me. I’d never [even] been to California.”

Gonzalez got accepted. He calls that time in his life “magical” and indicative of what was to come at SFCM.

“One thing that I really loved about the Conservatory was the absolute camaraderie within the department. We were all supportive of each other and there wasn’t like a separation of studios. David [Tanenbaum] played a major part of that...he’s a fantastic leader,” says Gonzalez.

When Gonzalez graduated in 2012, he originally wanted to go to grad school, but his path slowly shifted towards the beer industry.

From Guitar to Beer and Back Again
Gonzalez moved to Michigan and then Texas in the years after SFCM. He worked odd jobs while simultaneously practicing for grad school auditions and getting more into the beer industry. He returned to San Francisco in 2015—and after a stint working as a telefunder at SF Symphony, home of his future brew muse—Gonzalez found his calling working in production at the city’s classic beer institution: Anchor Brewing Company. 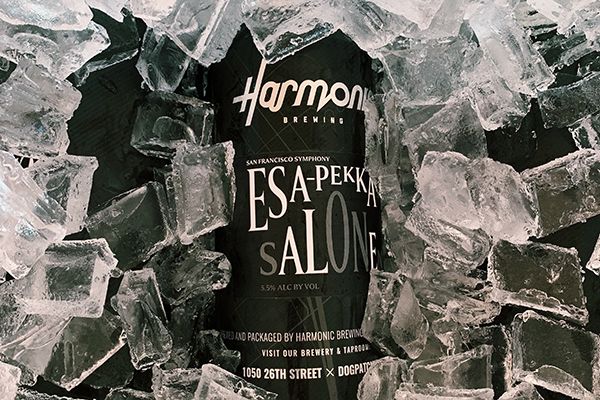 Finding fulfillment in pursuing passions in classical guitar as well as the brewing industry has led to Gonzalez' success.

“I finally enjoyed going to work, because I finally didn’t see work as something that got in the way of my career as a classical guitar player,” says Gonzalez. “I loved clocking in, clocking out, the balance of working for eight hours in beer, and then going home and working on guitar. It was these two creative outlets that I love and was finally able to do.”

Even though he was balancing both passions, Gonzalez still couldn’t shake the feeling he should be pursuing a master’s degree in guitar. He applied and got accepted to the Akademie Für Tonkunst in Darmstadt, Germany.

“I ultimately decided that if I didn't go to Germany, I would regret it for the rest of my life, so on a month and a half’s notice, I left all of my life foundation—my bands, my girlfriend, all my friends, my job—I, just kind of, went for it,” recalls Gonzalez, who’s time in Germany was a real turning point. While he enjoyed practicing guitar and learning from his teacher there, he missed leading a life that harmoniously combined his love of beer and guitar.

He left the school and eventually found his way home to San Francisco, working first at Triple Voodoo Brewery, and then, Harmonic Brewing.

Success on his own terms
For his entire life, Gonzalez says it was “guitar or bust,” which became tricky as he developed a passion for working in the beer industry. But after Germany, Gonzalez discovered that success to him truly meant pursuing—even blending—his creative outlets and that the guitar skills he gained at SFCM transfer well to any career pursuit.

“I said to myself, ‘It’s okay if you don't end up being a classical guitar player for the rest of your life, because...the problem solving ability that you develop when trying to learn an instrument like the way [you do at SFCM], the way it can make you a much more critical and practical thinker, the way it can make you be honest with yourself and appreciate other people’s hard work...all those things set you up to be successful in so many different areas of life,” says Gonzalez.

He uses these skills every day in his position at Harmonic, which he describes as a “jack-of-all-trades” role: “Our hands are in literally every part of the process—from conception to brewing to fermentation to packaging to sometimes [serving]...If I am bartending on a Saturday, every single beer that I hand people, I had a part in from literal conception to handing over the finished product.”

Sometimes Gonzalez even plays classical guitar at the brewery with a casual trio comprised of guitarists he met while at SFCM.

“Last year we did a mini Bach festival as well as a Dia de los Muertos celebration where we played Mexican composers,” says Gonzalez. He continues, “I see this as kind of a cool way to bring classical guitar to the same kind of people who would go to a brewery tap.”

Later, as Raziel stood at the symphony toasting Esa-Pekka with the inaugural beer he brewed, he reflected on a decade spent in and out of San Francisco that all started at SFCM, and he felt everything had come full circle, like he’d finally made it.