New and returning students (and their parents!) experience SFCM’s new Bowes Center building in the heart of the San Francisco arts district.

Moving to college for the first time or returning to school after a summer away is always exciting. It’s the beginning of a new chapter for some and the start of another school year full of opportunities for all. This year, San Francisco Conservatory of Music’s move-in day was extra special because it was the first time many students were able to see the Bowes Center in all its glory.

“It was better than I could’ve ever imagined for a college dorm,” says Oliver Wang (BM ’24), a sophomore in the technology and composition program who voiced his excitement for being on campus after studying remotely from his native Beijing, China last year due to the pandemic. Wang joined 228 new and returning students (of a total 465 enrollment) who moved into the Bowes Center on Saturday, August 20.

Wang was not alone in his impressions of the building, which includes a cafe, two major concert halls, a Center for New Media (state-of-the-art creative spaces for teaching, composition, recording, and music production), and an entire floor to house KDFC studios. The Bowes Center building also includes apartment-style housing for students.

“It’s pretty sweet,” says Lucas Davis (BM ’25). “I’ve only been to San Francisco once before, and it’s cool knowing that I’m actually going to live here!”

Taylor See (BM ’20; MM ’23), a voice department alum who is returning to SFCM for her master’s degree to study with César Ulloa, adds “[Bowes] is beautiful. It’s right in the center of the art scene, with the symphony and the opera. It feels like home.”

Students and parents arrived at Bowes in waves on Saturday, masked (per SFCM and local COVID-19 guidelines) and ready to move-in. Greeted by staff at check-in, students were then guided to their assigned rooms by friendly resident assistants, who pointed out the musical puns placed on the front door of each apartment (think: Dwayne “Baroque” Johnson”). 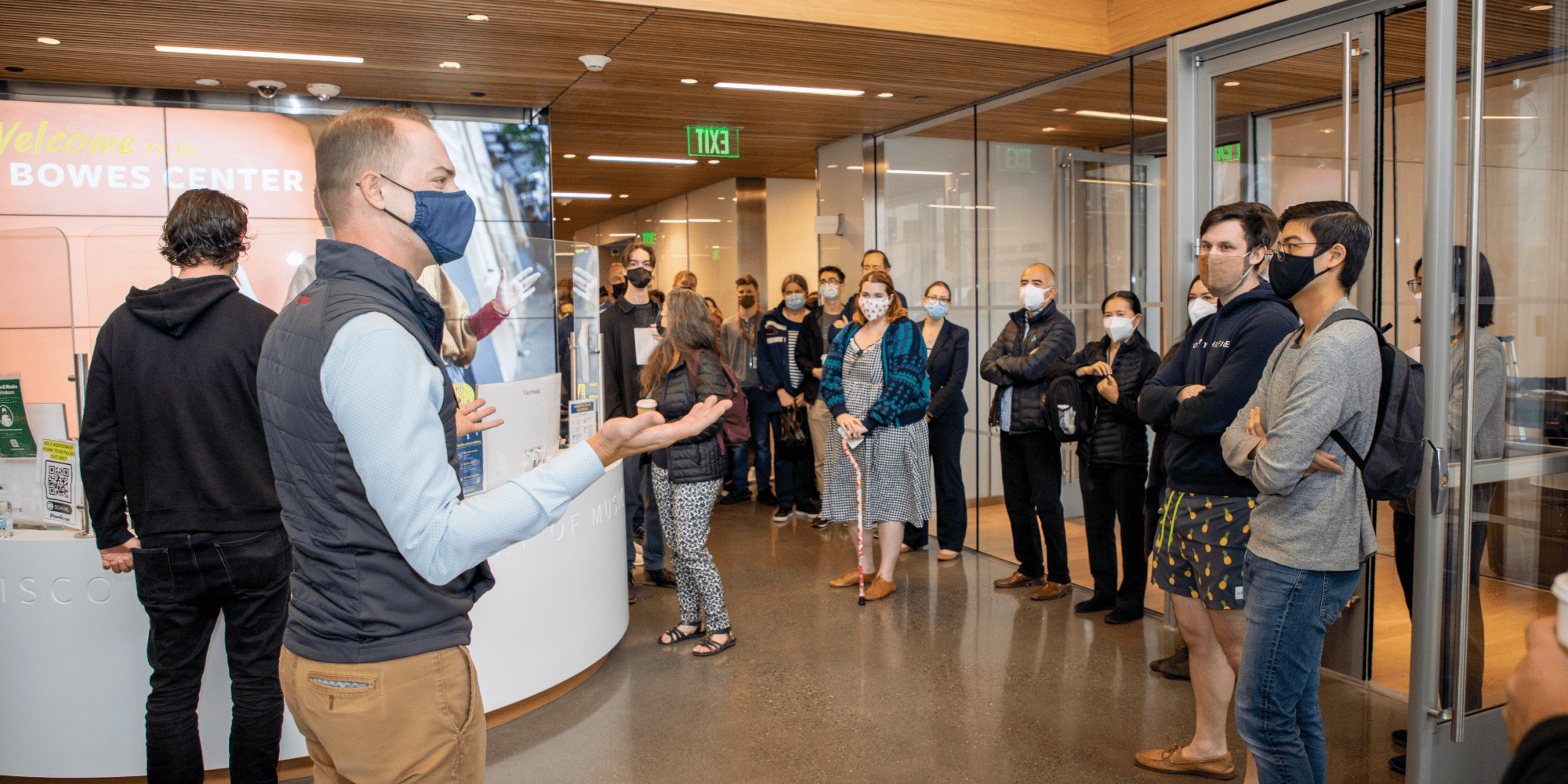 Jason Lawrence, associate director of admission, leads students and parents on a tour of the Bowes Center.

Comprehensive tours of the entire building rounded out SFCM’s move-in day. Students and parents saw the cafe, basement level technology hall, rehearsal rooms, keyboard lab, recital halls, and the new KDFC studios. They were impressed with the audio-visual recording technology in rehearsal rooms, that the practice rooms are open 24/7, and the epic views of Davies Symphony Hall and City Hall that can be seen from the 11th floor Barbro Osher Recital Hall (the spot of choice for family selfies). Tours got parents and students even more excited about the next school year and showcased why the Bowes Center isn’t just a place to live; it’s a lifestyle.

See a photo gallery of SFCM’s 2021 Move-In Day below and follow SFCM on Instagram to learn more about the Conservatory community.