Robin Sutherland ’75, former principal pianist of the San Francisco Symphony Orchestra, received his start with the symphony from an unlikely source.

Upon transferring from The Juilliard school to SFCM in 1972, Sutherland found himself filling in during a rehearsal for a faculty member who had fallen ill. Conducting the rehearsal was none other than San Franciscan pianist extraordinaire Leon Fleisher, whose indelible talent, fierce dedication to his art and singular tale of overcoming tragedy continue to endear him to the classical music world.

“I owe it all to Leon Fleisher,” Sutherland said. “I don’t remember what he said about the performance, but he must have thought it was alright, as soon after I started playing with the San Francisco Symphony. He gave me my start all those decades ago.” 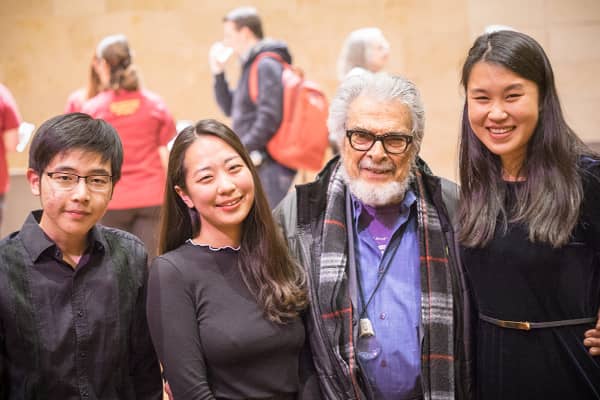 Fleisher’s story is legendary. An American wunderkind, he exploded onto the concert stage in his teenage years, landing concerto performances with many of the world’s greatest ensembles. However, a right hand injury forced him from the stage for a time. Fleisher delved into and developed the left-hand repertoire, conducting and teaching continuing to apply and share his musical acumen. He’d eventually regain the use of his right hand, though he continued to perform left-handed repertoire in addition to traditional pianistic offerings.

Fleisher died Aug. 2 at the age of 92. He had continued teaching online until the week before his passing.

“Boy, Fleisher could play like nobody’s business,” said Michael Whitman, vice chairman of the board at SFCM.

After SFCM awarded Fleisher an honorary doctorate in 1990, Fleisher delivered a recital of left-hand repertoire in 1992 in honor of the 75th anniversary of the conservatory’s founding that Whitman recalls vividly to this day: “I’d never seen anything like that before in my life,” he said. (He highly recommends the recording, “Leon Fleisher Recital,” available on Amazon and streaming services.)

Fleisher became an artist-in-residence at the Conservatory and returned to his hometown frequently to give master classes at SFCM.

“What was special about him was this extreme adaptability,” said Sutherland, who has served on the advisory board at SFCM for 10 years now. “I last heard him playing Beethoven’s “Emperor” concerto in Davies Symphony Hall, and I remember him returning to his left hand for the opening cadenza of the first movement. He didn’t have to at that point, but he did. He just had a moment with himself.”

An outpouring of admiration and remembrances have poured out online as the world mourns Fleisher’s passing. He is survived by his wife as well as several children and grandchildren, and his art lives on in his varied discography

“We witnessed a real flame at work” Sutherland said. “An absolute flame.”