Middle Eastern fusion music. A song composed for plastic cups. Psychedelic projections of Bob Ross painting. These are the kinds of things you might find separately in various bars, restaurants, or music venues around San Francisco. Michail Thompson (BM ‘22) brought all of them together on February 12 for The Moonlight Society, a free unique concert series held on San Francisco Conservatory of Music’s rooftop terrace.

“The roof is a space that has—at least in recent history—no tradition around what type of music is played there, so inherently any music up there would feel new and exciting,” says Thompson of the outside of the box venue that helped inspire The Moonlight Society’s eclectic programming.

In addition to the aforementioned Middle Eastern fusion and plastic cups music, the inaugural evening included computer music, a set called “percussion shenanigans,” a series of Hindustani chants, a brass quintet, and music written during a class where SFCM students made music with incarcerated individuals at San Quentin State Prison. With 35 performers overall (both undergrad and grad), the concert drew close to 100 students, faculty, and staff—a pretty big feat considering Thompson pulled the whole thing together in less than two weeks.

To be fair, he didn’t do everything on his own.

Mayor Michail
Thompson is like the mayor of a small town—he knows and makes friends with everyone. That’s his goal. And he’s genuinely excited about it and familiarizing himself with his peer’s music.

“We have so many talented artists and thinkers [at SFCM],” says Thompson. “I figured out pretty quickly that all it takes is an exciting idea to get people out of the practice room and making music together.”

That excitement is how he gathered different groups of people via quick conversation or text to get this concert off the ground. Some friends even came to him with suggestions, which is the coolest part for Thompson, who is all about collaboration and creativity. If someone comes to him with an idea, he never says no. Instead, he says, “You just figure out a creative solution to add them to something that’s already happening, or work with them to turn their idea into something that might be more presentable in a concert.”

Thompson has no shortage of concert ideas. He keeps a giant list of them on his phone. 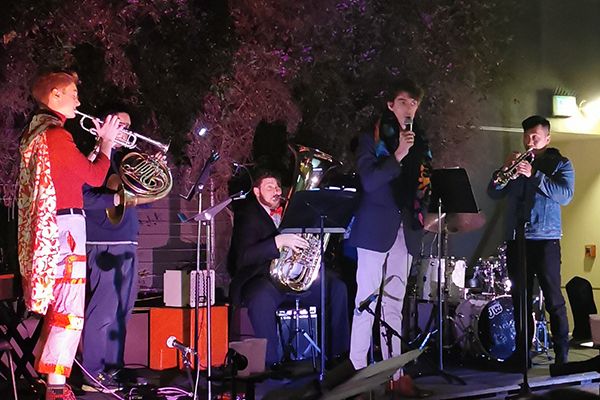 “I call them my brain children,” he jokes.

Months before The Moonlight Society got the greenlight from SFCM Dean Jonas Wright (and Thompson’s less than two-week window to deliver), it was one of his brain children.

The idea of bringing people together on the roof to experience various genres of music came later, shortly after Thompson took a Winter Term—a two-week course designed for students to experience something beyond the standard curriculum—where he and his fellow classmates were part of the above mentioned group that spent four days making music out of lyrics written by incarcerated individuals at San Quentin State Prison.

“We were in the prison, and it was a similar event [to what eventually became The Moonlight Society experience] because a lot of people had a lot of ideas, and we had three days to turn these ideas into pieces...turn their art into pieces, their poems into songs, and then we just put on a really cool concert that was very exciting and outside of the box,” says Thompson.

His experience making music at San Quentin taught Thompson that he could stage a concert in an unorthodox space in a short amount of time, and that it could be beautiful.

Later, he wrote a proposal for The Moonlight Society, formalizing his intentions, shared it with Chris Ramos, Director of Concert Operations (MM '12), and ultimately got approval from Wright, who was thrilled by Thompson creating another exciting performance opportunity for the community.

“This is the kind of conservatory I want us to be,” says Wright. “One that champions student creativity and entrepreneurship, and provides pathways for students like Michail to learn and succeed.”

Not His First Music Start Up
The Moonlight Society isn’t the first time Thompson has brought together his fellow students in an entrepreneurial endeavor.

“All the winds get the cool quintets, strings get the cool quartets,” says Thompson. “We saw that students aren’t really often writing for [brass chamber music], so we created a space around that.”

Thompson and another friend, Hayden Victor (MM ‘21), created a dinner concert series called Experience Una, after he learned that Victor is an accomplished chef. They combined their music and food skills to craft an evening of chamber music and just the right, creative dishes—which they discerned after breaking the music down into its fundamental elements.

“The deal is we aren’t only pairing music with food. We are giving you the fifth sense that a meal doesn’t usually have,” says Thompson. “You get the smell, taste, texture, the four senses, but you’re secretly craving sound.”

While they’re still finalizing the program, Thompson expects it to be just as diverse as the first—think, everything from a guided musical meditation to Japanese funk music. He hopes the series’ non-traditional spirit will inspire others to think outside of the box with their recitals and have the courage to, as he says, “spice it up.”

“I plan to keep doing [these concerts] until I graduate,” declares Thompson, who will undoubtedly continue being a master collaborator and producer.

“If you can tap into someone’s internal need to make art and their excitement to make cool art with friends, the possibilities are endless—especially in a school like this.”

Create your own performance opportunities at SFCM.