Few movie franchises have had as much an impact on the way we think about the future as Star Wars. And the sounds of the screeching TIE fighters, humming lightsabers and Darth Vader’s ominous breath are inextricable from John Williams’ iconic scores, justifiably some of the most revered in the history of film.

SFCM’s own Lennie Moore is uniquely qualified to discuss Williams and Star Wars, having both a deep history with jazz (like Williams) and a personal credit on the franchise: The soundtrack to the 2011 online role-playing game set in the Star Wars universe, The Old Republic (TOR).

Williams, Moore said, has a great knack for strong melodies and developing them as a piece progresses: “One section will be playing the melodic theme, and then another will chime in with their own flourish that acts as a call-and-response.” And despite Williams’ firm residence in the world of the popcorn blockbuster, Moore said his compositions can be “a little unpredictable.”

“If there’s a particular scale that would apply to a particular passage, sometimes he’ll just tweak one note that will sit outside of that: It’s not polytonal, but that little tweak will create an interesting suspension,” he explained. “A good example of it is in the Yoda theme from the original movies; in the last cadence before the end of the statement of the theme, there’s this one little half-step suspension that’s completely outside of the tonality and it just brings you to the edge of your seat before it resolves itself.”

Williams was a session pianist and did arrangements for big-band legend Stan Kenton, which informs his work as well. Moore said it’s possible to discern that influence by listening to Williams’ French horn accompaniment in particular."The classic one would be, if he’s in C major, to have 3 of the 4 horns playing a close voiced C major triad, and then he'll tuck in an Ab in the middle or the bottom of the voicing with the 4th horn player, which creates this crunchy little semitone dissonance against the G natural." Or take A New Hope’s iconic “Cantina Theme,” which is “voiced very much the same way you would a big-band tune.”

“My degree is in jazz composition, but most of what I’ve been asked to do in my career has been orchestral,” Moore said. For TOR, “I did probably about 45 minutes of music on that,” he explained. “They wanted us to be ourselves, as far as our own individual composer ‘thing,’ but also to play in the Williams sandbox of sounds.”

“We had a lot of discussions early on about, ‘What is Star Wars music?’ A lot of it is the harmonic language Williams uses, the instrumentation he uses, so we kind of stuck with his orchestration. Williams uses a lot of choirs—in the ‘Duel of the Fates’ piece, for instance, they’re singing in Sanskrit—so we stuck with that for ours.” 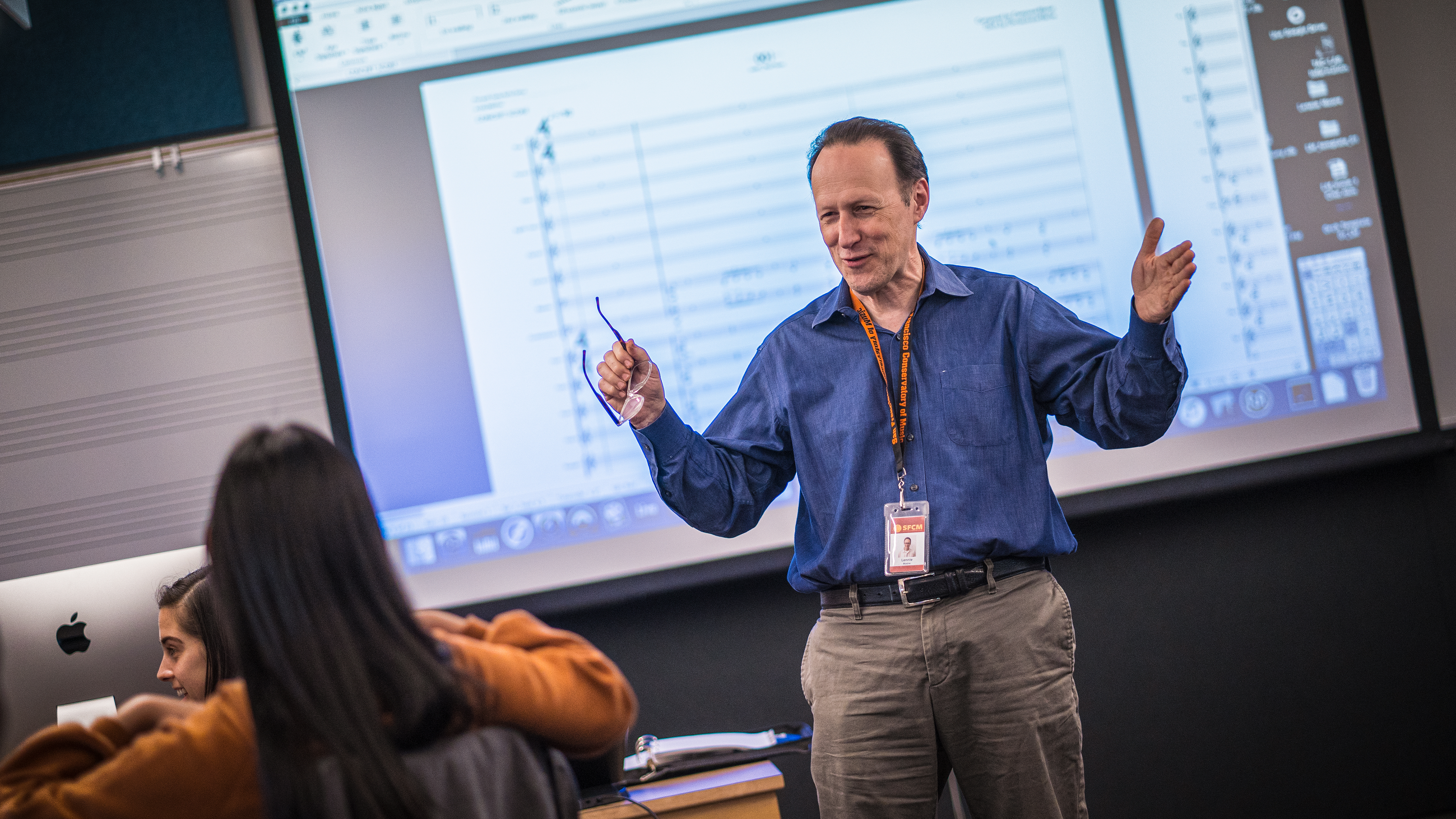 For TOR, Moore (pictured above) said, the team he was on was tasked with writing five hours of new music. “Because of the large volume of work, it would be like, ‘Well, I have three planets assigned to me, and 10 minutes of music for each planet. I got Alderaan, before it blew up.”

On the non-Star Wars front, the long-term project currently occupying Moore’s time is Outcast 2, a sequel to the very first game he ever worked on. “That’s a blend of orchestra, choir, a bunch of soloists and a bunch of synth and electronic elements. The term for this that gets thrown around is a ‘hybrid’ score, which I think is a little overused and misunderstood. Hans Zimmer really kicked it into high gear about 20 or so years ago.”

As far as some of the challenges inherent to film, TV and video game scoring, Moore sees them as all part of the shared hurdles of any large-scale project—dialogue and sound effects are simply more elements to add to the pile. “Anyone who’s ever tried to do even a two-part invention and follow all the rules knows it’s tricky. So add two more. Add 40. It becomes a little bit of a control problem: How can you state emotionally what you want to state in a film or video game without it getting diffused?”