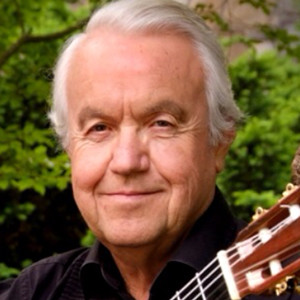 George Sakellariou began playing the guitar at an early age in Athens, Greece. His first teacher was his brother, a talented composer of popular music. Sakellariou received his formal training from the Conservatoire of Music in Athens. After graduating with honors, he was invited to further his studies with the renowned guitarist Segovia when the great master heard him play.

Upon completion of his studies at the age of twenty, Sakellariou joined the faculty of the San Francisco Conservatory of Music where he became chairman of the Guitar Department. There he taught his style of playing, with emphasis on clear tone and smooth lyrical lines, combined with a precise, strong sense of rhythm.

Mr. Sakellariou has performed around the world in concert halls from the Kennedy Center, and other major halls in the United States, to Singapore, Hong Kong, Turkey, Heidelberg, Rio de Janeiro, Bogota, Montevideo, Toronto, Calgary, Taipei, Osaka, and others. At the Toronto Festival he performed the Leo Brouwer Guitar Concerto for the guitar and orchestra with Leo Brouwer conducting. This performance was considered an incredible feat because he replaced guitarist John Williams on short notice. He has made many radio and television appearances including BBC, PBS and Radio France. Several extensive and impressive articles about Mr. Sakellariou have been published in internationally renowned Guitar Player magazine.