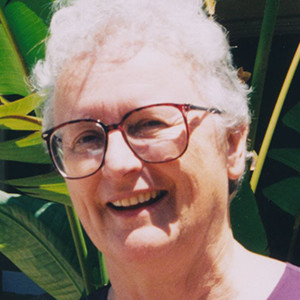 Born in Stockton, Joan Gallegos was a native Californian, as were her parents. Her mother was a ballet teacher, her father a doctor. Joan started piano lessons while in pre-school. Her passion lay with the violin, but she had to wait until her hands were big enough to handle the instrument before she could start lessons.

Joan attended Stanford, and while she was mainly interested in music and history, she graduated as a poly-sci major. After Stanford, Joan worked for Wells Fargo. Following her father's death, she moved for a short time to Carmel, but found life there limiting. Joan moved back to San Francisco and took a job with Foremost Dairies in California. Joan then moved to Berkeley, and entered the graduate program in music at the University of California, where her adviser was Albert Elkus.

Joan studied piano privately with Marcus Gordon, and studied composition at U.C. Berkeley with Arnold Elston and Seymour Shifrin. It was at U.C. Berkeley that Joan taught her first class in ear-training and sight-singing, and realized that her true passion lay in teaching. Through a connection at Berkeley, Joan was recommended to Milton Salkind at the Conservatory to teach a musicianship class, and joined the Conservatory's faculty in 1968. In her 29 years at the Conservatory, Joan helped to develop the Musicianship program, and directed the New Music Ensemble. For an article printed in a Conservatory newsletter, Joan described her involvement in the New Music Ensemble:

"In 1969, when Howard Hersh and Robert Moran started the New Music Ensemble, I found myself involved as a performer and stage manager. After John Adams took over the Ensemble, and as his responsibilities with the San Francisco Symphony gradually took him away from the Conservatory, I assumed the responsibility for directing the New Music Ensemble."

Upon retiring from the Conservatory in 1997, Joan was awarded an honorary doctorate. She then moved to Kensington, California, where she became very active in the community, and served several terms on civic boards.

A staunch advocate for women and a pioneer in the field of new music, Joan remarked in a 1994 Conservatory newsletter, "It's essential for students to have the chance to perform all types of music written." In November of 2013, Joan was interviewed for the Conservatory's Oral History Project. When asked for some favorite memories from her life, Joan described early memories she had of visiting her grandmother in Berkeley and going out for ice cream floats, but also spoke of the importance of the many special people who made up her life.