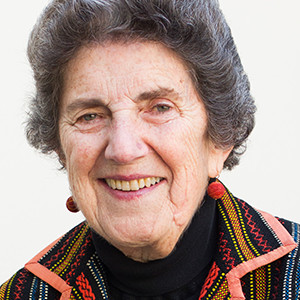 Kris Getz was born in Los Angeles, and grew up in Tucson, Arizona. Her father had a dry goods store in Tucson. Kris rode horses and enjoyed the outdoors at the family ranch. She began taking piano lessons when she was four, sang in church choirs, and took guitar lessons. Kris attended Stanford on a Westinghouse Science Scholarship, and was interested in becoming a veterinarian. At Stanford Kris met her husband, Harold, who was from an old San Franciscan family.

Kris has devoted much of her life to helping others. In addition to her thoughtful and generous attentions to the Conservatory over the years, she also helped to build a library at the Alamo School in San Francisco, worked as a tour guide for foreign visitors in San Francisco, was in a folk singing duo, was a food runner, and still volunteers for Hospice.