Alum will work alongside his SFCM mentors

Bryce Leafman (PSD ‘19) played his final audition for Esa-Pekka Salonen on a Thursday in late February, hoping to join the San Francisco Symphony this fall. Mere hours later, he sat in Davies Hall and watched the orchestra—including his mentors and SFCM Percussion Co-Chairs, Principal Timpanist Ed Stephan and Principal Percussionist Jacob Nissly—perform Carl Nielsen’s Symphony No. 5. When the concert ended, Leafman got a text from Stephan that read, “Come backstage.” He immediately did, not knowing he would be offered the Assistant Timpanist/Section Percussion Player position and that his life was about to change.

Leafman had another life-changing moment in spring 2015 when he first met Stephan. The acclaimed timpanist taught a master class at Leafman’s college in Boston. Leafman was so impressed, he applied and was accepted into a master’s program to study with Stephan in Pittsburgh. But he wasn’t ready to leave Boston and decided to stay there for his master’s degree.

However, Leafman didn’t forget Stephan. The following year, he spent a few transformative months with him at Aspen Music Festival.

“After my first summer with Ed, I realized that if I’m going to study anywhere after [Boston], it’s going to be with Ed Stephan,” recalls Leafman. “Ed is the most compelling and thoughtful musician. He challenges his students to think about percussion and timpani—music, in general—in different ways.”

He elaborates, “No one talks about music the way Ed does...and everything [he] does comes from a very emotional level. His above all mantra is, ‘What experience do you want your listener to have? What emotion do you want your audience to feel?’ And that trickles down to tangible things we can do with timpani [to achieve this], like what stick choice are you using and where are you hitting the instrument...but it all starts with what emotion you want to elicit from the audience.”

Leafman connected with Stephan’s perspective because he too got into this industry—and loves playing in an orchestra, specifically—to take people on a musical journey.

When Stephan became the Principal Timpanist at San Francisco Symphony and later joined SFCM, Leafman knew that’s where he had to be.

An Impactful Year at SFCM

While at SFCM, Stephan, Nissly, and faculty member Jack Van Geem helped Leafman truly find himself as a musician.

“After six years of studying, I had put myself in the box of execution,” explains Leafman. “What was missing was what I described as a musical voice. [My time at SFCM] helped me cultivate that.”

He recalls his first mock audition with Nissly.

“The first thing Jake said to me [after I finished playing] was, ‘You made a lot of nice sounds. But everything you did was vanilla—maybe, a little French vanilla,” he jokes. “He said, ‘Where was the mint chocolate chip? Where was the Neapolitan when there needed to be Neapolitan?’ I was very one track—I call it the execution mind. There was a lot of room for improvement in my expressivity. Ed and Jake identified that immediately and sent me off in that direction.” 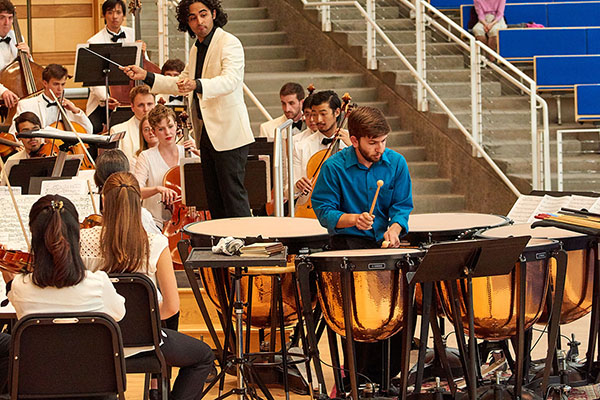 Bryce performs at the Aspen Concerto

Working with Van Geem also helped Leafman evolve as a musician. “I’d take a solo to Jack that I’d been playing for six years—one where I thought, ‘I’ve got this down’—and he would still point things out that I hadn’t even considered. He’s just on such a next level.”

Reflecting on Leafman’s time in the SFCM percussion department, Stephan says, “Bryce is a classic example of that coveted kind of person who naturally exudes their human qualities through their music making. As a student, he had the kind of eagerness to grow that a teacher craves working with—and grow he did! As a person, he carries a positivity that cannot help but lift the spirits of those around him.”

Over the course of a year, Leafman saw the effects of his time at SFCM on the audition circuit: He won Principal Percussion at the Billings Symphony Orchestra and Chorale, and he was one of four finalists for a position with the Montreal Symphony Orchestra.

But there was still more growth to come before San Francisco came calling.

The Road to San Francisco Symphony

Before studying with Stephan, Leafman had focused primarily on percussion. But at his mentor’s suggestion, Leafman worked more on timpani. By the time he began practicing for the Assistant Timpanist/Section Percussion Player position—only a few handfuls of orchestras in America have this dual role—Leafman felt uniquely suited for it. Still, it was a long audition process.

“If you count the time I started preparing for the preliminary round, it was a seven-month process,” says Leafman. With incoming music director Salonen finishing up his contract in London, the only window for the finals was in February of this year. The preliminary and semi-final rounds took place in November 2019. Leafman advanced to the final rounds and spent months prepping. He even co-rented a studio and instruments with a friend, so he could spend the entirety of January and February leading up to the audition practicing.

Leafman was one of six finalists. At the end of the round, the director of personnel said that he and another candidate were chosen for a super final round with Salonen.

“Up until then, the curtain was up,” says Leafman. Stephan, Nissly, and Tom Hemphill—another percussionist who has been with the symphony for 46 years—were behind the screen, blind to who was performing. But in this round, the screen came down. Leafman and the other candidate got the chance to engage with Salonen and play with Stephan, Nissly, and Hemphill. Afterwards, both players were told they would advance to one more round—an orchestra round.

“I had never done an orchestra round before. So I called every musician I knew who had and got their advice,” says Leafman.

On the day of the fifth round, Leafman felt ready, but it was still a daunting moment, a moment he calls, “an out-of-body experience.” The symphony had cut their rehearsals short to offer Leafman the chance to audition with them. He played excerpt after excerpt, only repeating something once, and it was over in less than ten minutes.

A Future with the Symphony 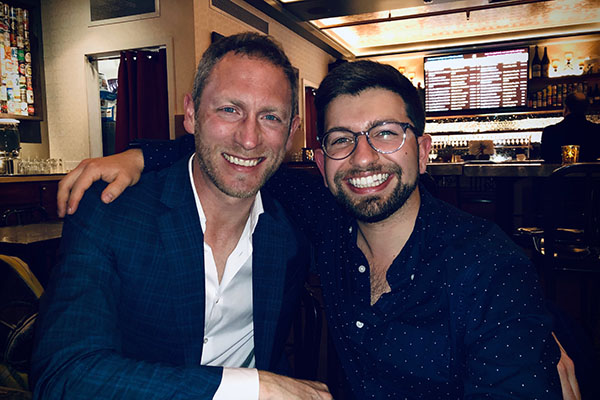 After his audition, Leafman strolled to his favorite coffee shop and through the park to unwind. Then, he found himself back at the symphony watching his mentors perform a work he had just played an excerpt from during his audition. The irony did not escape him. Neither did the feeling that the symphony was the right place to be.

When Leafman went backstage after receiving that summoning text message, Stephan and Nissly were still in their tails. They took him to the director of personnel, who asked what he thought of the concert. He sang the orchestra’s praises. Then, she popped the life-changing question, “How would you feel about playing with this orchestra?” Stunned, it took him a moment before he replied, “It would be a dream come true.”

By that time, Stephan and Nissly were already in the room congratulating him, and the rest of the musicians were crowding outside waiting to welcome him to the family.

Reflecting on Leafman joining the orchestra, Stephan says, “[Bryce] is most certainly going to become a vital piece of the SFS’s ever-enduring polish and charisma. We could not be prouder of him, and of the work that his success is a reflection of in the SFCM percussion department.”


Find your mentors at SFCM.