The game—nay, the challenge—was posed to a jet-lagged yet surprisingly chipper delegation of SFCM trustees, donors, and staff who, in November, accompanied three of SFCM’s distinguished piano faculty and head technician to Hamburg, Germany, on a quest to select four new concert Steinways for the Ute and William K. Bowes, Jr. Center for Performing Arts. The group’s challenge was to discern which piano, among the sea of eligible specimens offered by Steinway & Sons, would be the first to be chosen by the faculty. The instructions: raise your hand when you hear the piano that you think is best, that the faculty will choose.

As renowned pianist and faculty member Garrick Ohlsson took, in turn, to the benches of Steinway’s most prized showroom Hamburg Model C’s, the trained musicians in the eclectic bunch grew focused and wide eyed in anticipation, while the self-professed non-musicians looked bemused and skeptical, but willing. Renditions of a selection from the Andante of Brahms’ Piano Concerto No. 2, Op. 83 awoke the pianos under Ohlsson’s touch, but nearly all the hands in the room went up for just one: Piano number two was clearly the winner, as it possessed a vibrance, resonance, and sheer brilliance that was unmatched by any other. 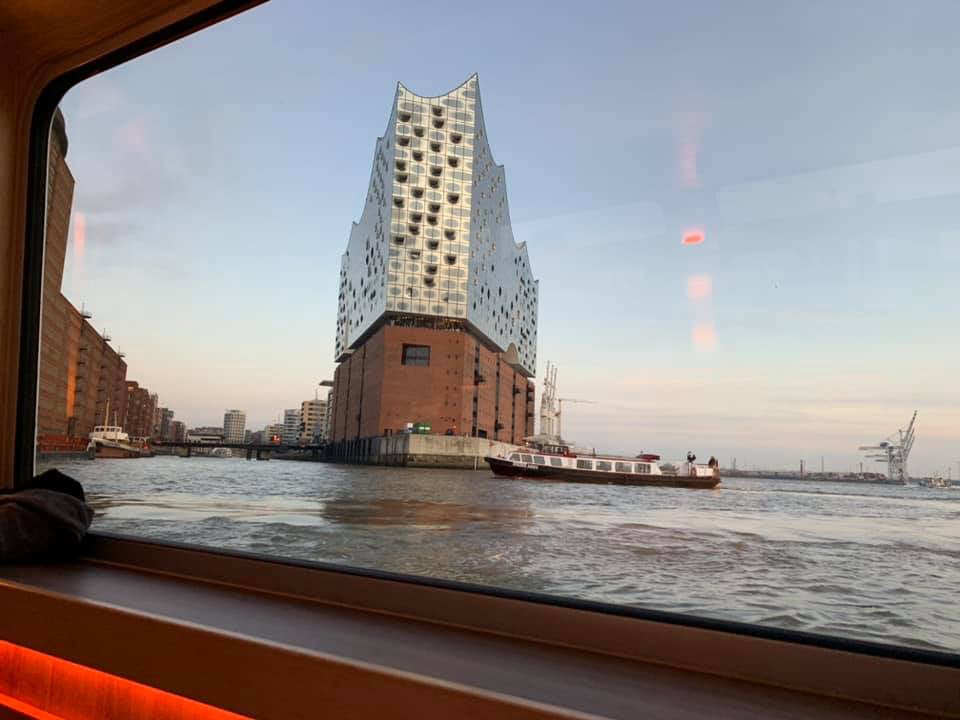 Cruise down the Elbe River

The listening game was but a brief moment from the four-day Hamburg excursion—a lively, fruitful, and educational junket that also provided some chance bonding among the merry band of travelers, as well as with various hosts and colleagues encountered along the way. Participants raved about the trip, and Timothy Foo, Chair of the Board of Trustees, said he wouldn’t have missed it for the world. “I haven’t had that much fun in years. It wasn’t just the music and the tours, it was also the camaraderie among faculty, staff, and trustees that made it special.”

Day one featured a broad introduction to Hamburg via a cruise down the Elbe River, apropos to Hamburg’s important history as Germany’s largest port city. The gentle voyage, along with tasty fare and an impressive young string quartet from SFCM’s partnering school, the Hamburg University of Music and Theatre (HfMT), provided the perfect setting for connecting with old and new friends, and for kicking off the coming adventures.

HfMT President Elmar Lampson was one such new friend, and on the third evening of the trip, he and a welcoming party of faculty, staff, and students honored their San Franciscan counterparts at the Hochschule with a reception, followed by a jointly produced concert anchored by Garrick Ohlsson. The HfMT student performers were magnificent, and it was a joy to hear cellist and SFCM alum Peter Pearson ’12 and ’14, now an HfMT fellow. Celebrated soprano Emma McNairy ’11, a member of the ensemble at Theater Lübeck since 2016, also made an appearance, representing both her U.S. and German homes in fabulous manner. 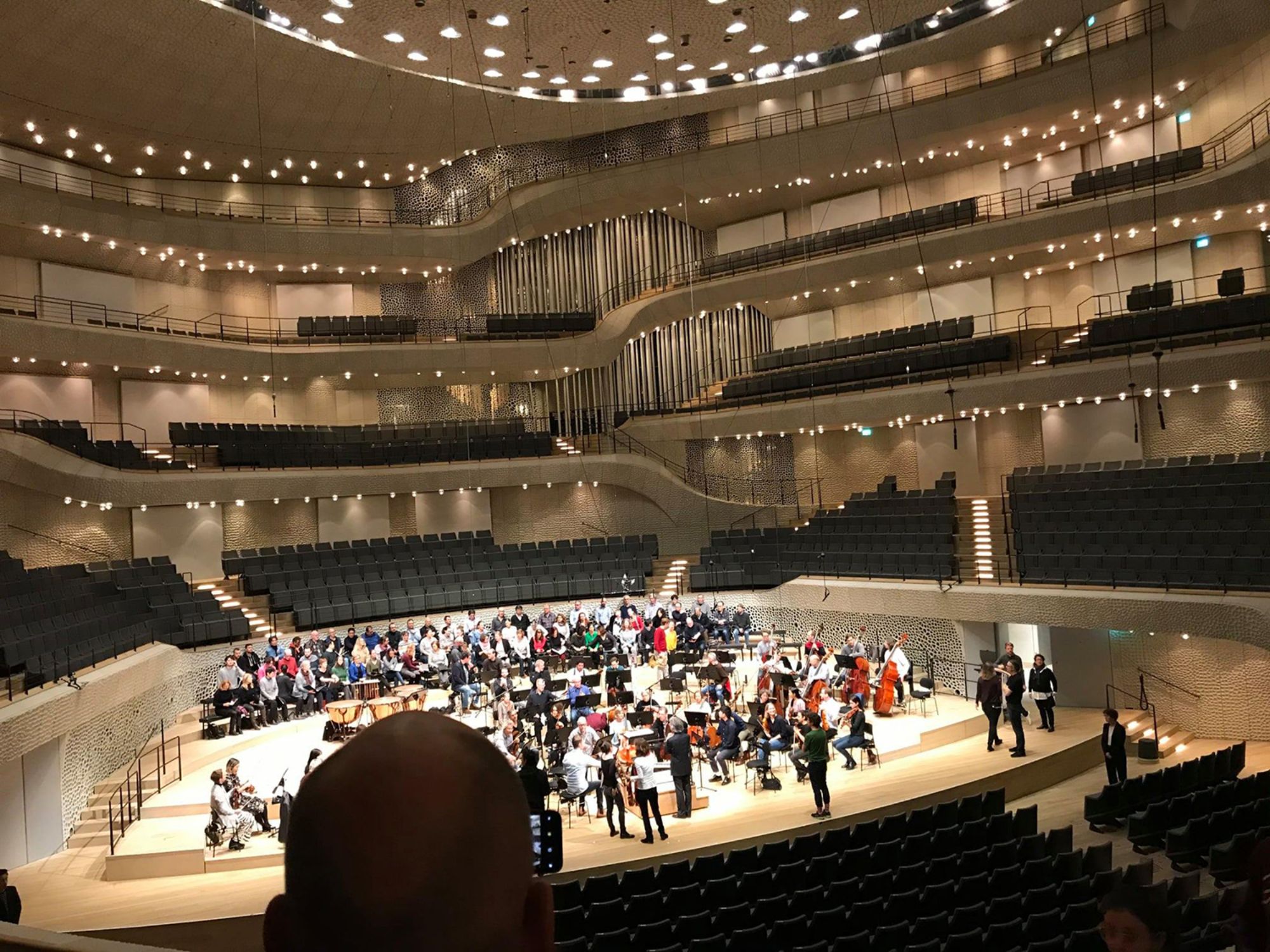 Earlier that day, the troupe was treated to a dress rehearsal of the Hamburg State Philharmonic Orchestra and a private introduction to maestro Kent Nagano at the Elbphilharmonie, Hamburg’s concert hall famed—or rather, infamous—for its 10-year construction saga that resulted in a final price tag of around €800 million (that’s nearly a billion U.S. dollars, people!). Despite the sticker shock, the “Elphi,” as it’s affectionately known, has become a dazzling glass landmark situated proudly above the Elbe river, captivating concertgoers and tourists from around the world.

Other notable highlights from the trip included a sampling of traditional German food (fish paired with sauerkraut? Why yes!), a visit to the iconic and centuries-old fish market (the 7 am trip was noted as optional on the schedule), and a fascinating and entertaining musical-history walking tour of Hamburg led by Dr. Roland Salchow, former State Secretary of the Hamburg Ministry for Culture, a theoretical physicist, and current lecturer at HfMT.

Turning back to the visit to Steinway—the impetus for the trip—the faculty devoted the entire day to carefully and methodically playing and inspecting their way through each piano in the testing room. Because pianos are formed from wood, an organic material that flexes and settles over time, the instruments tend to differ from one another in sound and depth, and thus possess their own unique and individual characteristics. Yoshikazu Nagai, Chair of the Piano Department, said that during the testing process, he and his colleagues Corey McVicar, Garrick Ohlsson, and head piano technician Michael Disque were listening for a number of elements. “It was a combination of the beauty and the sound-sustain. After striking the key, listening to how the sound develops, listening for color and quality of the tone with different repertoire, finding the correct piano for the right space, and just an overall evenness and balance throughout the range of the instrument with touch, sonority, and range, from the intimate repertoire to the more ferocious, large scale concerti repertoire.” Nagai also underscored the importance of connectivity between artist and instrument in describing their search for “a piano [that] inspired us to play with even more detail and nuance.” 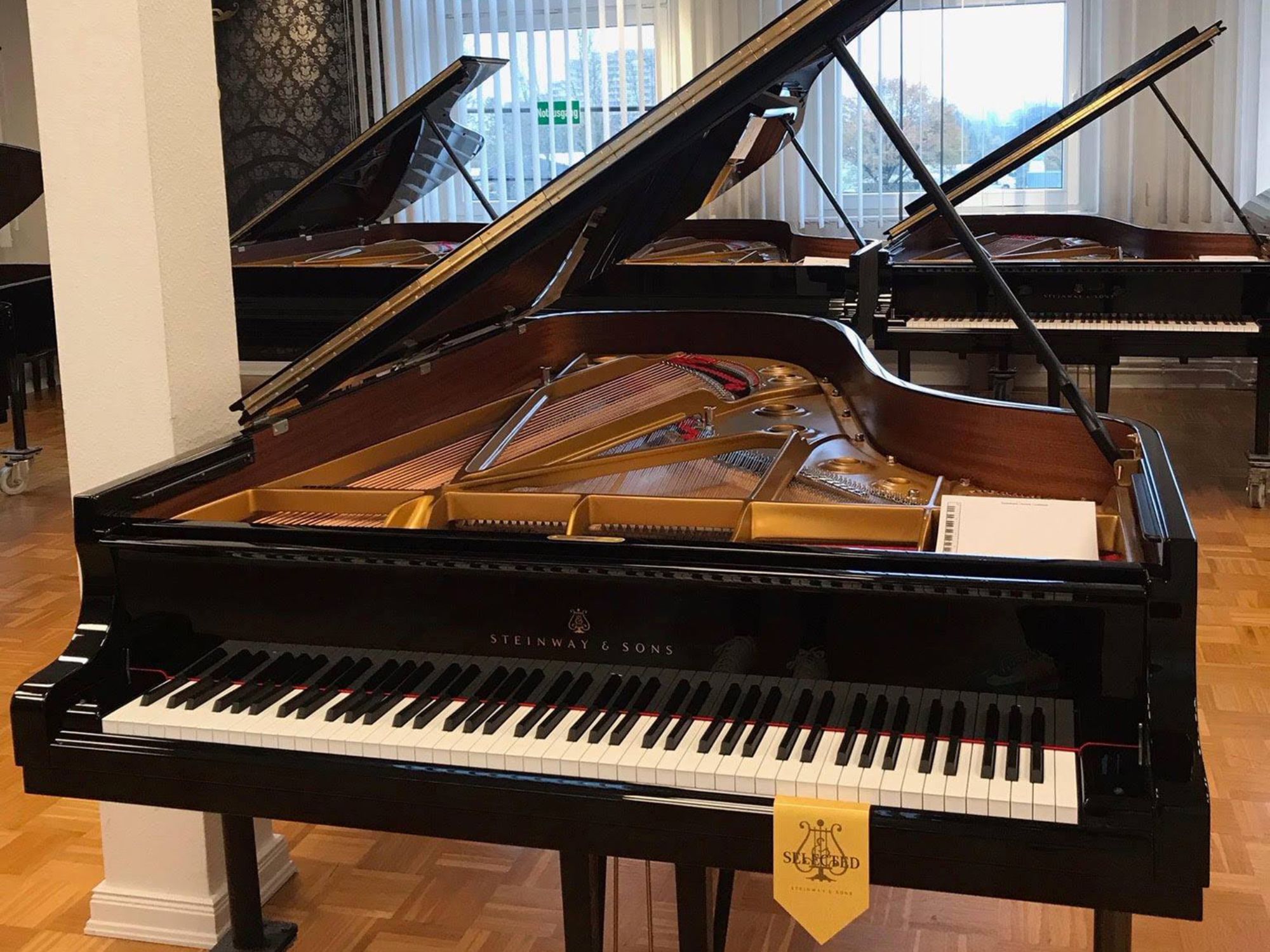 Perfect combination of beauty and sound-sustain

During that labor of love, the rest of the group was invited into the factory for an in-depth tour (a rare opportunity with no photos allowed). The factory floors, though plentiful and vast, were crowded. Rather than a modern assembly line, each floor resembled a giant wood-worker’s—or tinkerer’s—studio, a pleasing throwback that felt comforting in a way. Enlarged reproductions of the original patents adorned the walls and defined various stations. There are literally thousands of steps that go into the building of just one instrument, and almost all of them are still carried out by hand by highly skilled, dedicated craftspeople who have spent years honing their specialized techniques. A variety of woods, strategically positioned for their strength, durability, and resonance, make up a Hamburg Steinway. Each piece of wood goes through a lengthy curing process and is scrutinized and inspected for the slightest imperfections: too green, slightly warped, a grain that is too close together, too far apart, or just inconsistent.

Near the end of the tour, the group came upon an intensely focused man, hunched over a disembodied golden harp (the harp is the cast-iron frame inside a piano that anchors both ends of the strings). In his right hand he held a small, fine-detail paint brush. With it, he carefully traced in black paint the raised metal letters, in the iconic font, that spelled out the Steinway name and logo. By that point in the tour, it shouldn’t have been a surprise that the lettering inside each and every piano was hand painted, but it was striking, nonetheless. Perhaps it was because this particular craft was reminiscent of a practicing pianist: in the letterer’s left hand was a rag that he used to wipe away a mistake and try again, working each branded phrase carefully and precisely until he got it just right.