This past May, two SFCM guitar students, Bradly Pupa ’18 and Alex Holcomb ’19, were selected to join faculty member David Tanenbaum on a trip to China, the reciprocal part of an exchange between Beijing’s Central Conservatory of Music and the San Francisco Conservatory of Music. The initiative, a collaboration that featured performances which crossed continents, kicked off in January with two students and a teacher from the Central Conservatory coming to SFCM to play on a concert, take part in a master class, and see the sights of San Francisco. Come springtime, the SFCM cohort was eager to return the favor, sending its musical delegation to Beijing in order to gain insight from their counterparts on cultural and musical levels.

Tanenbaum, thinking that traveling only to Beijing would be a missed chance to experience more of the country and collaborative opportunities, called on his colleagues in Tianjin and Hangzhou so that he could add a couple of stops and make the trip a two-week excursion. With added sightseeing trips (to places such as the Forbidden City and the Great Wall) and performance engagements, the trio was now on tour. 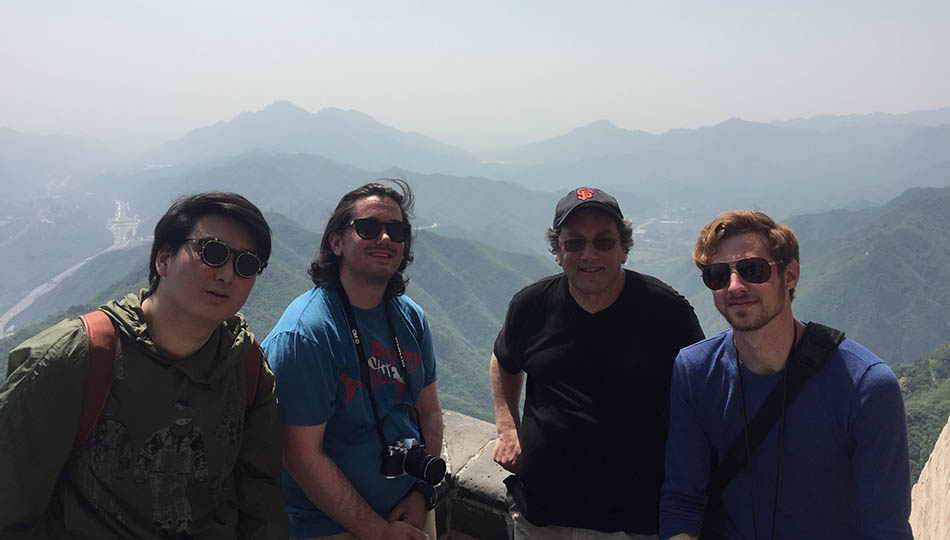 At the Great Wall

“Our visit to China was one of the coolest opportunities I’ve had to make music,” says Holcomb. “I’ve never seen a culture so different yet similar to our own. Exploring with Brad and David was fascinating and thought provoking as we were able to share our views and experiences and explore the ideas with which these experiences present us.”

“The entire trip was an artistically moving experience, but also humbling on a human level,” adds Pupa. “Getting to visit a country where very few people share the same language or cultural traditions allowed me to be immersed in what felt like a totally different world. This feeling of being a cultural outsider dissipated when we met our collaborators who showed us that, while our cultures may be very different, our love of music and guitar transcended that difference.”

In Tanenbaum’s eyes, the touring aspect is what really set apart this trip for Pupa and Holcomb. This introduction to a touring musician’s lifestyle is exactly what the students needed at this point in their lives.

“They really had an experience of what it’s like to be on tour, which neither of them had had before,” notes Tanenbaum. “You play your concert, you have your parties after the concert, you jump on the train, you go to the next town, and you do the whole thing again. That’s just an invaluable experience for students to do that with someone who’s been doing it for more than 40 years.”

He also feels that these trips do not only provide worthwhile educational opportunities for current students, but help in recruiting top-tier talent from China, as well.

“I think it’s always a good idea to forge these connections,” says Tanenbaum. “Two years ago, when I was in China, we did have some students apply to come here [to SFCM]. We have quite a few Chinese students every year now.”

Tanenbaum is hopeful that these cultural exchanges will continue to crystallize, and perhaps even include other faculty members from the guitar department in future trips. With burgeoning interest from international students to study at SFCM—and the unique opportunities afforded to domestic students as they explore music on an international scale—it’s a safe bet that SFCM’s global presence will continue to build.