Various ways students share music in-school, virtually, and out in the community

SFCM presents over 500 performances a year collectively attended by more than 26,000 people. Students perform in solo recitals, large and small ensemble concerts, fully staged operas and musical theater productions. While performance opportunities vary by area of study and degree (more information and a rundown of individual programs), here’s a list of just some of the many ways SFCM students take the stage. 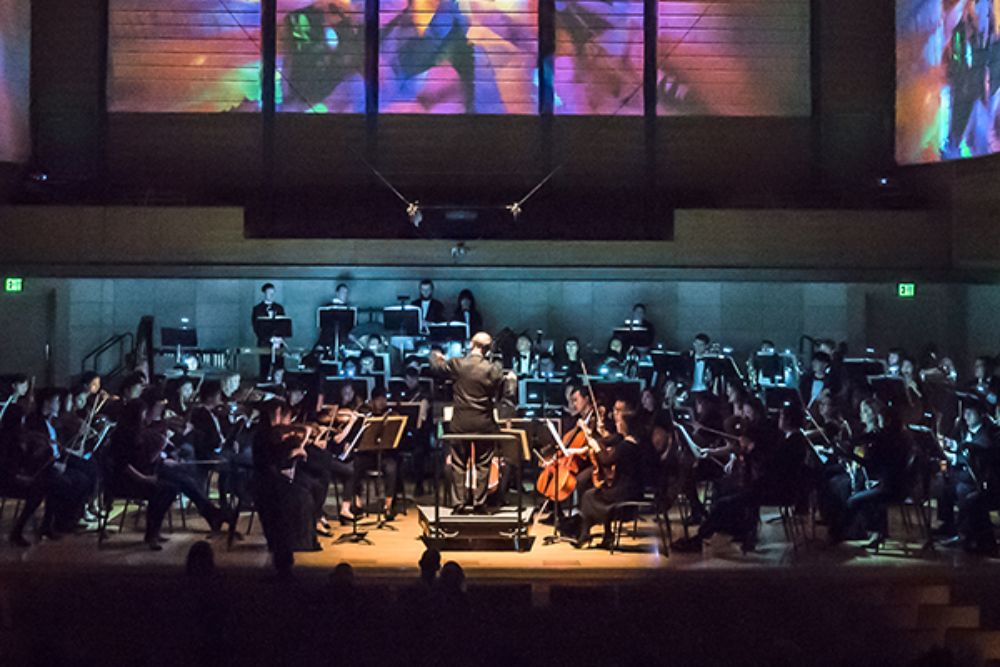 7 major concerts each year gives SFCM Orchestra students many chances to work in a wide range of reportoires.

Each year, SFCM produces four fully staged opera and musical theatre productions with full or chamber orchestra. Recent fully staged operas have included L’elisir d’amore, Don Giovanni, and The Rake’s Progress, while recent musical theatre performances include The 25th Annual Putnam County Spelling Bee, She Loves Me, Company, Little Women, Urinetown, and The Musical of Musicals (The Musical!). In addition to fully staged productions, a number of scenes, programs, and other performances with piano accompaniment are presented each year.

Whether students are versed in the repertoire or are playing it for the first time, the Baroque Ensemble explores historical performance practice with peers from a variety of disciplines. A variety of pieces have been performed in the recent past, including Handel’s Ode for St. Cecelia, Giulio Cesare, and Agrippina; Monteverdi’s L'incoronazione di Poppea; and Purcell’s The Fairy Queen. The ensemble averages 5 performances annually and has also participated in the premieres of new works by SFCM composition faculty members Mason Bates and Elinor Armer.

A weekly class for brass majors, where students are assigned a coach that helps them discover and refine techniques for preparing music. Each group’s efforts culminate in performances of music from varying styles and historical periods at the end of each semester—totalling eight performances annually. Watch brass ensemble students perform with San Francisco Symphony musicians (and SFCM faculty members) Mark Inouye and Nicholas Platoff.

SFCM believes students should have the opportunity to stand out as individuals while working together as a cohesive unit. The Conservatory Chorus is a perfect example of this dynamic as every concert makes a point of highlighting our students as soloists, offering them ways to expand their artistry and build their aural skills, no matter their area of study. All undergraduate students (except those in the Roots, Jazz, and American Music program) participate in chorus. The Chorus culminates in a performance every semester and has also performed full orchestral works with professional orchestras in the Bay Area such as the California Symphony.

Led by Chair of the Guitar Department David Tanenbaum, this ensemble has twice won the Guitar Foundation of America Ensemble Showcase Competition and performs both on and off campus. The guitar ensemble held 10 concerts in the 2018-2019 school year.

Students perform a variety of works written in the 20th and 21st centuries in two public concerts annually. Personal contact with visiting composers is provided whenever possible to strengthen the bond between performer and composer, a vital aspect of today’s performing landscape today.

Performing works of composers from Edgard Varèse to Steve Reich, percussion ensembles have long been a staple of the chamber music world. Spanning mallet instruments to drum kits, this ensemble experience offers performance opportunities that enhance students’ understanding of musical cohesion as a percussionist. Percussion Ensemble members study performance techniques and works specific to the wide variety of instruments and styles necessary to master percussion, and present two performances each year, sometimes with performers from other music disciplines.

A practice-based area of study for advanced students, String and Piano Chamber ensemble performances are given in both informal and formal workshops, and in numerous public concerts at the Conservatory each semester. Last year, students participated in 27 chamber performances. Fun fact: SFCM was the first school to offer degrees in chamber music and performance. 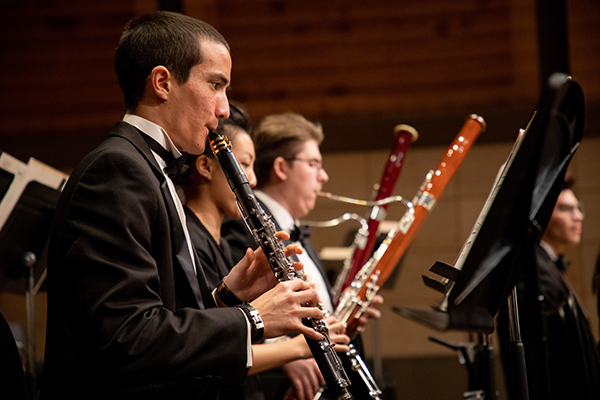 With four public concerts each year Woodwind Chamber players have several opportunities to showcase what they learn.

Be individually coached by, and work with, players from the graduate chamber music program. Performances are given in both informal and formal workshops, and in four public concerts at the Conservatory each year. Woodwind chamber ensembles are often made up of mixed instrumentations, so musicians who play a non-woodwind instrument might still have a place in this ensemble. Faculty member Jeff Anderle (part of Splinter Reeds) leads this group.

Undergraduate juniors, seniors, and second year graduate students in most majors have solo and department recitals every spring for fellow peers, faculty, family, and members of the greater San Francisco community.

12. Gigging around the Bay Area.

Students can audition for Hire SFCM Musicians. Totaling over 350 performances each year, this program gives a taste of the working musician's life with students performing at private functions throughout the year that run the gamut from weddings to corporate celebrations, and graduations. The Hire SFCM Musicians office also has other information about gigs in and around the Bay Area, as does Groupmuse (a national company where musicians are hired to play local house concerts). Recent gigs include opportunities with local professional orchestras like Berkeley Symphony and various ensembles. Students even sub with the San Francisco Symphony.

Adapting performances to the times of shelter in place, SFCM launched Tiny Dorm Concerts offering students (as well as faculty, alumni, and special guests) a platform to perform nightly in live streamed concerts, from wherever they are in the world. See previous Tiny Dorm Concerts.

14. Create your own opportunities.

SFCM musicians are entrepreneurial artists. The Conservatory encourages students to make their dream concerts and programs come true even when that means an eclectically programmed evening of music on the roof.

Performance opportunities are abundant at SFCM—whether they’re online because of external events, on campus as part of the curriculum, at locations around the Bay Area offering working professional experiences, or student conceived and produced concerts. Students have many chances to take their skills out of the practice room and onto the stage, gaining the performance experience they need to launch their future careers.

Start your performance journey at SFCM.