Fanfare is an annual event for members of the Conservatory Society, supporters who contribute $1,000 or more annually to SFCM. Since 2004, Fanfare has honored a distinguished alum each year, recognizing the innovative and impactful career paths that SFCM alumni have pursued. 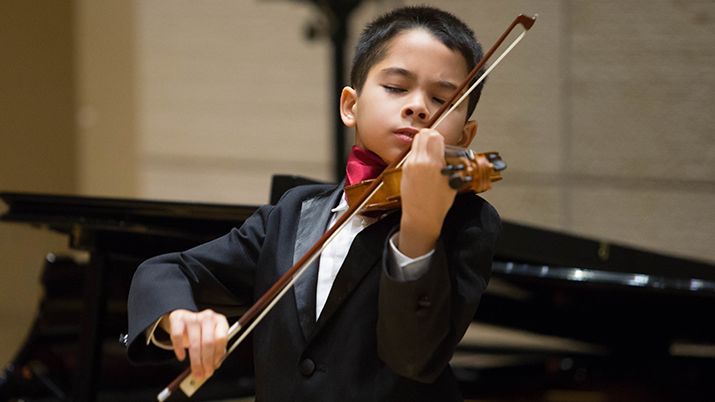 A former student of SFCM Guitar Chair David Tanenbaum, Rodriguez founded the Los Cenzontles Cultural Academy in San Pablo, CA in 1994, a grassroots organization that educates underserved youth in traditional Mexican art forms and provides community-based cultural events for families. Rodriguez's passion for music education as a catalyst for social transformation and developing cultural identity has earned him a reputation as a community leader and local hero.

The conversation touched on music’s special ability to unite people across myriad boundaries. “Eugene exemplifies the extraordinary things one can do with a music education,” said President Stull. “His work with Los Cenzontles demonstrates SFCM’s core belief in the power of music to connect people and communities. We are honored to celebrate his immense contributions to music and the community.”

In his early 20s, Rodriguez took the bus from Santa Cruz to Berkeley for lessons with Tanenbaum. “From David [Tanenbaum], I learned all sorts things about music, and he would lend me books and records. It really drove home for me that music – that art, culture, and education – is always about the transfer of knowledge from one person to another. We can build institutions, but we can never forget that kind of connectivity that is the essence of education – it is my passion.” Encouraged by Tanenbaum, Rodriguez enrolled at SFCM and earned his BM and MM in guitar. 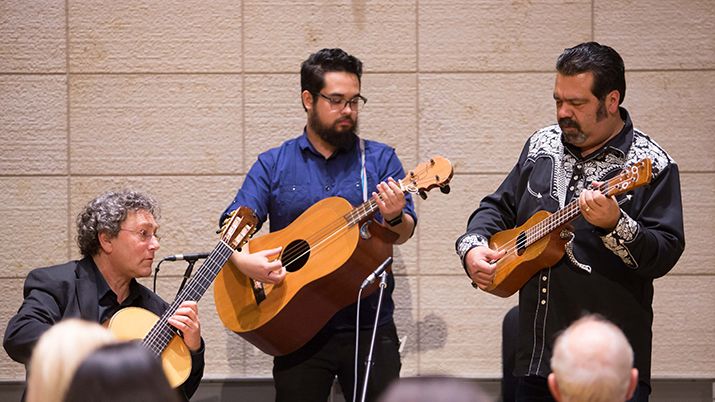 Rodriguez performed an intricate baroque piece by Scarlatti with Tanenbaum, their first performance together in years. Shifting fluidly from this baroque classical piece to a Mexican folk song, they illustrated these traditions’ close historical ties – a connection that has always fascinated Rodriguez and compelled him to start Los Cenzontles. His son Emiliano joined him and Tanenbaum for a performance, the first time Mexican folk music has been performed on the SFCM Concert Hall stage.

Rodriguez reflected on his non-traditional path: “When people try to put me in a box, I take it as a challenge. We’re not micro-demographics, we’re human beings. There are connections that go so deep between all kinds of music and all kinds of cultures. That is what makes life interesting, that is what makes culture, art, and literature fascinating. My approach is that we’re going to find the connections between Irish and Mexican music, between African American and Zydeco music. We’re going to find the connections between Baroque and Mexican music… because they simply exist. They’re there. They’re obvious. Unless you’re not paying attention.”

Rodriguez spoke to the importance of an arts education for young people, no matter what their future paths: “Art is rigor and that is where you learn.”

Learn more about the Conservatory Society and how supporting SFCM's scholarship fund prepares the next generation of talented young performers, teachers, and community leaders.