Revisiting and revising a past work isn’t all that uncommon a practice for a composer. Virtually everyone does it. However, it’s rather special when an opera can go from an instrumentation of two pianos to a chamber orchestra, creating new depth and color that hadn’t been explored before. This is the dramatic change that was implemented by composer William Bolcom for his opera Lucrezia, premiered in a new version at SFCM earlier this May.

Lucrezia is a complementary piece to John Musto’s Bastianello (with libretti composed by Mark Campbell), part of the double bill opera program that was presented at SFCM. The works, commissioned by the New York Festival of Song, were originally written to make use of the Festival’s two-piano setup and originally premiered as a double bill in 2008.

Both Musto and Bolcom, along with their respective publishers (Peermusic and the Edward B. Marks Music Company), had discussed creating fuller orchestrations for their operas after their premieres. With financial support from institutions like SFCM, that became a reality. Several years after the first performances of the two-piano version of Bastianello, Musto went back to the work and created an orchestrated version. 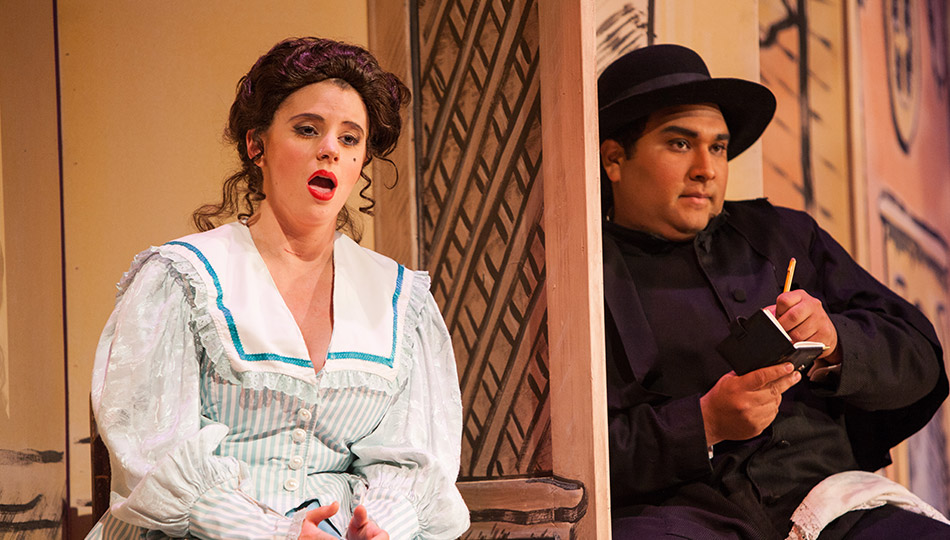 “I learned that Maestro Bolcom was eager for a commission to orchestrate Lucrezia to match the orchestration that John Musto had already written for Bastianello,” says Curt Pajer, who conducted the program at SFCM. “I jumped on this opportunity for a number of reasons: we are always looking for opportunities for our students to sing with orchestra, which is one of the most important experiences we can give them—in this case, with the added benefit that they would be participating in a world premiere. Additionally, it was an opportunity for SFCM to be credited in perpetuity as the commissioner of this orchestration by a composer of such high stature.”

“The two-piano version is practical for music schools’ opera use in many cases, such as an opera scenes class,” says Bolcom, keen to note that both versions serve their purposes. Regarding the new version, he’s “glad it has been done, as it makes performances in houses more practical.”

“The two-piano score for Lucrezia is so funny, sexy, exciting, lush … I could go on!” says Heather Mathews, director of SFCM’s production of the recent double bill. “The natural percussive nature of the piano really helped our students get this type of staging in their bodies. My biggest concern, not being able to hear the orchestral version until two days before the performance, was that the orchestrated version wouldn't be as sharp or expressive in the manner that the two piano version is.”

Mathews quickly realized that wouldn’t be an issue.

“At the first orchestra dress rehearsal, my concerns were immediately abated,” she continues. “Imagine admiring a beautifully decorated Christmas tree and then someone turns on the twinkly lights. That's how if felt. Electric. The percussion, the strings, the brass—it all added to the timing of the comedy and our casts used those new colors and sounds to create something that was hugely entertaining and quite fulfilling.”

“One of the most exciting things about having the opportunity to perform a work with brand new orchestration was getting to interpret what the composer wanted the music to convey based off which instruments he chose to play certain themes and musical lines,” says Elizabeth Dickerson, who played the titular role in Lucrezia. “It gave me the chance to really study my character and revealed a lot about her thought process and her underlying emotions as the opera progressed. I also thought that the zarzuela style of the music, and all of the colors that Bolcom included in his writing, were even more prominent once we finally started rehearsing with the orchestra. From all of the exuberant brass moments and the use of all of the different percussion instruments, having an orchestra really helped us bring this wonderful piece of art to life!”

And while Pajer still loves the two-piano version of Lucrezia, he has developed a strong affinity for the work in this new presentation.

“The original two-piano version is wonderful in its own right, but the new orchestration really captures the flavor of the zarzuela aspect of the opera, from the mariachi brass to the castanets and maracas in the percussion section,” he says. “The lush string writing also emphasizes the sultry nature of the piece, especially in Lucrezia's PG-13 arias!”

It would seem a change in color can breathe new life into a work, whether it’s new or old. This one seems to have hit the mark.