SFCM knows how to combat the January blues—with innovative, creative, even unexpected courses lasting no longer than a few days or a week. It’s all part of Winter Term, which gives students the opportunity to explore subjects they might otherwise never encounter during their regular course of study.

This year, students learned the ins and outs of managing a performing arts organization, brought visual projectections to the concert hall, and even played with a professional ensemble. Add to that courses in film score recording with MaryClare Brzytwa, an art history treasure hunt (an annual Winter Term staple) with Nikolaus Hohmann, and a neuroscience study in brain stimulation and practicing with Indre Viskontas and this year’s Winter Term—totaling 47 projects—was nothing if not expansive.

Among the courses offered, “Music Management for Musicians” was a standout. Led by Peter Pastreich, former executive director of the San Francisco Symphony and Philharmonia Baroque Orchestra, and former San Francisco Opera general director David Gockley, the class was a whirlwind survey of how to run a successful symphony orchestra or opera company. Distinguished guest speakers from every corner of the industry spoke about the function of a board of directors, how to manage a fundraising team, the intricacies of navigating labor relations, setting financial goals, the essentials of artistic administration, and much more. Guest speakers included SFCM Board Chair Timothy Foo, philanthropist Bernard Osher, and many others.

“Management will affect all musicians,” says Pastreich. “The seminar is intended to help those who will later work in opera companies, symphony orchestras, or other ensembles to understand why those institutions operate as they do, and perhaps to envision ways they can help them operate better.”

The six-day course took real-world case studies to help students enter the complicated world of nonprofit management. The students participated in a two-day exercise where they were assigned roles as orchestra administrators, were asked to choose the next music director for a theoretical orchestra, solve the orchestra’s financial problems, and take part in a mock negotiation.

The seminar culminated in a concert at the San Francisco Symphony conducted by Jaap Van Zweden, who the students met following the performance for a discussion of his role as music director of the New York Philharmonic. “We want to expose students to the career possibilities in music administration,” says Patreich, “either as an alternative to performance or as something they may do to advance their work as performers.”

The Art of Light Projection

Faculty member Taurin Barrera led the course “Introduction to Projection Mapping,” which introduced students to creating visuals to project on walls and surfaces. Barrera explains, “Projection mapping is a technique that turns everyday objects and architectural elements into a display surface for video projection. For this course, we had the opportunity to use the beautiful Caroline H. Hume Concert Hall as our canvas and paint the entire space with light.” 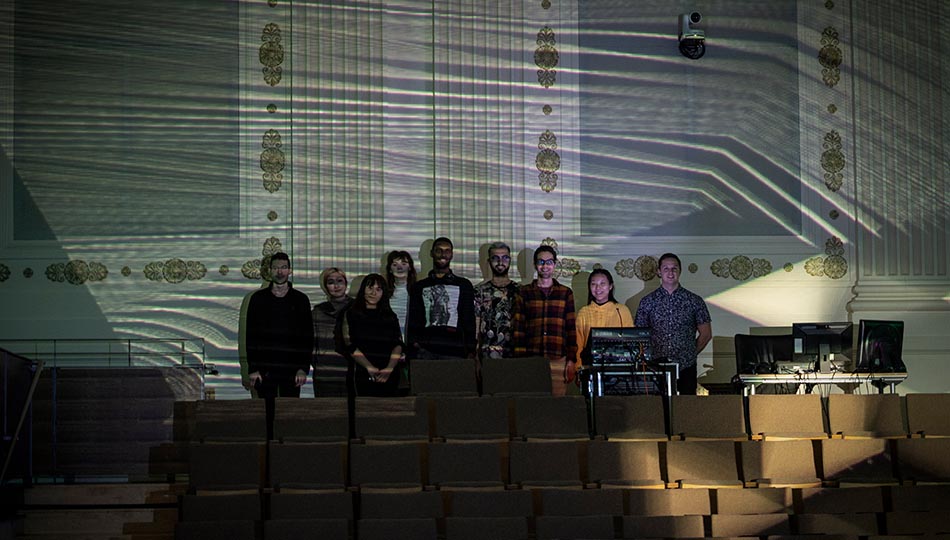 Projection mapping has become a favorite tool of presenters, making it a skill in high demand. “I've always been interested in exploring the possibilities of incorporating visual elements into my performances,” notes cello student Stephanie Li ’19. “Taking Taurin's class inspired me, and now I want to add new dimensions and layers to my performances with projections!”

A particular highlight for Barrera and students alike was projecting their art onto the walls of the Caroline H. Hume Concert Hall. Qianqian Jin ’20 linked the images to her guzheng, and as she played, the walls were illuminated with colors and patterns generated by the music she was playing.

For TAC student Kamran Adib ’21, projection mapping represents the future of live music. “I wanted to take this course because the importance of having visuals with live musical performance is rapidly growing. To have a truly stimulated audience in an age where everything is a tap or swipe away and happens rapidly, visuals are required.”

Collaborating with the Berkeley Symphony

Led by Martin West, music director of the San Francisco Ballet, a handful of lucky students took part in a side-by-side concert with the Berkeley Symphony featuring three SFCM soloists and one composer whose work was premiered. Through this experience, students were given a glimpse into what it is like to be part of a professional orchestra, the speed at which they work, and the level of musicianship expected.

“Meeting and playing alongside professionals—and potentially future colleagues—is very helpful in establishing a career,” says clarinet student Ivan Ferguson ’21. “It also reminds you what direction we're all heading in in terms of how to play in orchestra and what it should sound like.”

Featuring winners of the SFCM concerto competition, West notes the thrill each musician felt playing a concerto at the highest level and his own delight at getting to explore less traditional orchestral repertoire like the Tomasi Concerto for Trombone and the Ponce Concierto del sur for guitar. Winners of the concerto competition included Nicole Hillis ’18, Bradley Pupa ’19, and Boxianzi Ling ’20. Alumnus Daniel De Togni ’18 saw the world premiere of his work, Tsuioku: On the Internment of Japanese Americans, at the concert.

With Winter Term 2019 now completed, Adib, who took “Introduction to Projection Mapping,” looks back at his first impression of the initiative, and how his experience far exceeded his expectations. “When I first sat in student orientation, I never believed I could enjoy something like Winter Term. Now here I am, thrilled to have participated and itching in anticipation for the next one!”