“Since its founding in 2011, the Rubin Institute has played a crucial role in creating and sustaining substantial opportunities for new critics,” said Institute benefactor Stephen Rubin. “In addition to the week-long symposium, during which Fellows work directly with preeminent music journalists, the Institute financially supports criticism across the country through grant-funded posts at partner newspapers, in collaboration with the Ann and Gordon Getty Foundation. We are already seeing the payoff from this investment in our industry, with gifted young music critics earning sought-after bylines and staff positions.”

“Coming to the Rubin Institute essentially rocket-boosted my career as a writer,” said 2014 winner of the Rubin Prize in Music Criticism Zoë Madonna, now a reporter at The Boston Globe. “Not only did I learn on my feet from the intensive experience of panels, concerts, and overnight deadlines, but I made connections with other writers and mentors that have lasted years.”

Returning members of the 2020 Rubin Institute Faculty Writers Panel represent some of the most respected journalists in the music industry: Gary Giddins, author of Bing Crosby: Swinging on a Star

, The War Years 1940–1946 (Little, Brown, 2018); Joshua Kosman, San Francisco Chronicle critic; Tim Page, Pulitzer Prize-winning critic and special contributor to Past / Forward: The LA Phil at 100 (Los Angeles Philharmonic, 2018); John Rockwell, writer, critic, and former editor of The New York Times Sunday Arts & Leisure section; Alex Ross, The New Yorker critic and author of Wagnerism: Art and Politics in the Shadow of Music (Farrar, Straus and Giroux, 2020); Stephen Rubin, consulting publisher for Simon & Schuster; and Heidi Waleson, The Wall Street Journal critic and author of Mad Scenes and Exit Arias: The Death of the New York City Opera and the Future of Opera in America (Metropolitan Books, Henry Holt and Company, 2018). Members of the Writers Panel will present pre-concert lectures (tickets required) and a public panel discussion (free/no ticket required) over the course of the five-day symposium, offering the public the chance to hear firsthand from those at the forefront of music journalism.

The performances are reviewed by a select group of student writers (Fellows) from colleges and conservatories across the country, and their work is critiqued by the Writers Panel in private workshops. The Institute culminates with the awarding of the $10,000 Rubin Prize in Music Criticism to the Fellow who demonstrates exceptional promise in music criticism. The runner-up will receive an award of $1,000, and both prizes are intended to support further study, experiences, or internships in the field of music journalism. Rubin Institute Fellows have gone on to write for distinguished publications such as The Boston Globe, The New Yorker, The Washington Post, among others.

Select Rubin Fellows will also have a unique opportunity to publish future reviews in the San Francisco Classical Voice (SFCV), one of the Bay Area’s top music publications. In a partnership that began with the 2014 Rubin Institute, SFCV will offer six-month paid internships to the winner and the runner-up of the 2020 Rubin Institute. Part of SFCV's Emerging Writers Program, the interns will write one review a month under the mentorship of some of SFCV's most highly accomplished music critics.

“The Rubin Institute for Music Criticism provides extraordinary opportunities for our students to forge connections with top music journalists and get invaluable feedback to refine their work over an intensive, career-altering week,” said SFCM President David H. Stull. “It’s thrilling to see so many of the program’s emerging writers thriving at publications across the country.”

The application period is open now through May 15. 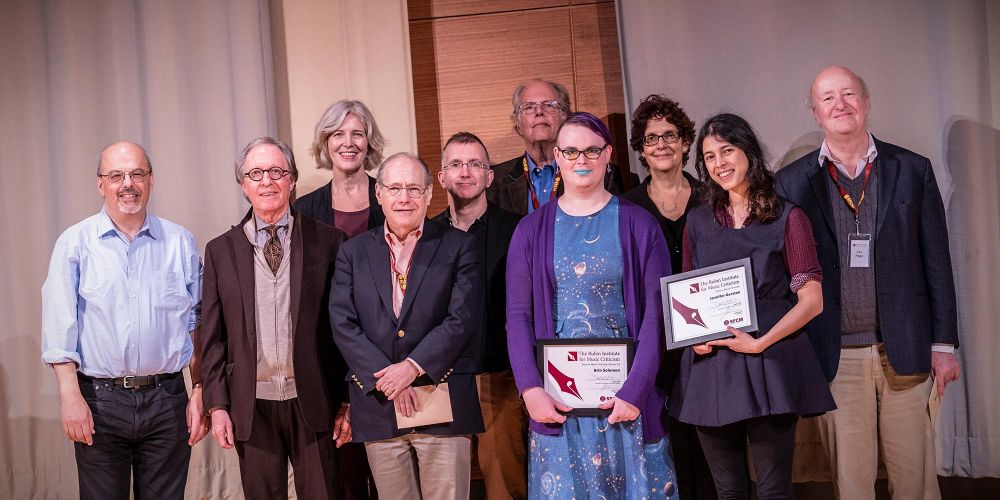 Following the Rubin Institute’s move to San Francisco Conservatory of Music in 2014, the Institute teamed with the Ann and Gordon Getty Foundation to create a new initiative for advancing and maintaining qualitative discourse on music. Through this innovative approach, the nonprofit consortium partners with news organizations to provide a financially sustainable model for supporting thoughtful and critical journalism across the profession. In the program, news outlets retain complete editorial control over assignments and content, and they provide some funding, as well. Current partnering organizations include The Boston Globe, Star Tribune (Minnesota), Pittsburgh Post-Gazette, The Seattle Times, Toronto Star, and The Dallas Morning News, among others.

For more information on the Rubin Institute for Music Criticism, including the Fellowship application and guidelines, please visit sfcm.edu/rubin-institute.