As a child, Sepideh Moafi ’07 had no idea where in the world she and her family would end up living. Her parents fled Iran in the early 1980s, and she was born in a refugee camp in Regensburg, Germany. They moved to California when Moafi was a child, and she grew up in a working-class neighborhood in the Bay Area.

Amid these hardships, classical music was always a fixture in the Moafi family. Sepideh and her father bonded over a shared love for Mozart and Rimsky-Korsakov. But costly extracurricular activities like private voice lessons were never part of the equation. “I reluctantly took choir to knock off some fine arts credits in high school. But when we started working on Vivaldi’s Gloria, the bug bit me. I fell madly, obsessively in love.”

During her sophomore year of high school, Moafi’s choir director asked her to stay after class. She thought she was in trouble for chewing gum—again. Instead, he asked her to sing. She did, and he advised her to immediately start taking lessons. “He told me I had a voice—that I had ‘it.’ I didn’t really take him seriously.”

Within two years, Moafi was enrolled as a freshman at SFCM. “I applied to only a few schools, and SFCM stole my heart. The faculty was warm, kind, inspiring and welcoming. Sylvia Anderson was a big reason why I was interested in the program. I was fascinated by her relationship to music, her career, and once I was able to meet and work with her, I knew SFCM was the right place for me.”

For Moafi, her years at SFCM felt like heaven. She was finally free of the incessant bullying she experienced growing up and found a family that accepted her exactly as she was. Music helped her express herself in a way she had never been able to before.

“Growing up in a refugee immigrant family wasn’t the easiest experience for a number of reasons. When I found music, I didn’t just find my voice, I found my language. I was finally able to express all of the deep, rich feelings and complexities within. I don’t exaggerate when I say that I would walk to school every day with butterflies in my stomach. As soon as I’d approach that old building on Ortega Street and hear an orchestra of instruments each in their own worlds, I felt at home.” 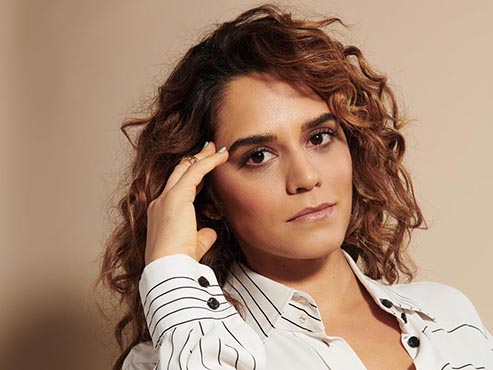 She fondly recalls her two favorite lessons from her time at SFCM, the first imparted by her voice teacher, Jane Randolph, who would remind her that learning to sing doesn’t mean changing anything; instead, it means shedding what isn’t needed. The second, from Bobby Weinapple’s class on improvisation for opera singers, was that it is always more important to reveal than to merely project. “These two principles have guided me toward a deeper trust and surrender in my artistry.”

And surrender to it she has. Today, Moafi, who also holds a master’s of fine arts degree in acting from University of California, Irvine,is a celebrated actor and singer, appearing in numerous productions both on screen and on stage. Prior to her breakout role as Megan Byrd on ABC’s critically acclaimed Notorious, Moafi commanded scenes in roles for several high-profile television series including Black Box, The Good Wife, The Blacklist, and Limitless. Currently, she is portraying the role of Loretta, “a Puerto-Rican sex-worker turned feminist activist,” in HBO’s Golden Globes-nominated series The Deuce.

Equally dominant on the stage, Moafi was praised in 2018 by New York theater critics for her work as Dahna in the off-Broadway world-premiere of One Thousand Nights and One Day, in addition to performing in other leading roles in productions including As You Like It, Romeo & Juliet, and in the world-premiere of Mihai Maniutiu’s After Troy. Staying true to her opera roots, she has appeared with companies and in concerts across the country, including title roles in Handel’s Agrippina, the world-premiere of David Conte’s America Tropical, and with the Constellation Chor’s world-premiere performance of Ashley Fure’s Filament during the New York Philharmonic’s 2018 Opening Gala Concert.


Despite her incredible talent and success, she still points to the first time she sang the role of Susanna at SFCM in Mozart’s opera, Le Nozze di Figaro. “My heart still beats a little faster when I think of it!”

In addition to her distinguished and prolific professional endeavors, Moafi is fiercely committed to advocating for those in need. She works with the International Rescue Committee, “the leading agency in refugee resettlement in the U.S.,” which provides aid, relief, and support to people caught in humanitarian crises. She also works with the New York City Mayor’s Office of Immigrant Affairs to help integrate and bring equality to immigrants and refugees. Currently, Moafi is leading a fundraising event for both organizations set for November 17. Sponsored by HBO and The Cutting Room, the New York based gala will be “a celebration of the rich heritages and diversity of our refugee and immigrant communities in New York City, and will feature a number of celebrity speakers, with catering by refugee-owned company, Eat OffBeat, and with refugee chefs from all around the world.”

When asked how she finds the dedication for so many different types of projects and pursuits, Moafi says that it’s easy when it’s things she truly loves.

“People often ask how I change my approach when I work on different types of projects, but I believe that authenticity doesn’t have a genre. It reveals itself when you pursue the pure truth of whatever text, music, stroke, movement, anything you’re working on.”

To the many young people just starting out in their careers, Moafi has one piece of advice: Dream big. Once a refugee who is now a successful singer and actor, her words take on powerful meaning. “Life is too short to be realistic with your goals. Go nutty. Dream your goals into reality.” But she adds some practical advice: “Be the hardest working person in every room you walk into.”