Nicole Yazmin (MM ’22) didn’t know what to expect when she enrolled in composition workshop, a required class for all first year Technology and Applied Composition (TAC) majors. Her goal of working as a composer for media and video game music seemed a distant ambition, especially during a pandemic. Then she learned about the Sony Project, a semester-long composition assignment.

Each semester visiting artists from Sony Interactive Entertainment work with SFCM’s TAC students to compose individual scores for a fictional video game. “The project is a crash course in the life of a media composer,” says Taurin Barrera, TAC executive director. Students receive a detailed prompt with tone references and an emotional map to help guide them. In fall 2020, the prompt was for a fictitious third-person action-adventure game called “Parallel.” Students were given the choice to write for one of five themes, each with its own distinctive map and narrative arc. Instrument groups change each semester—Parallel included the violin, viola, cello, and harp—challenging the composers to bring the score to life in their own unique way.

“The really special part is that we do more than just design an orchestral piece,” explains Yazmin. “We are creating a hybrid sound that includes both live instruments and custom samples, along with other synths.”

During the first half of the course, students sketch out ideas in a digital audio workstation, creating rough demos they submit to producers at SONY and TAC faculty member Matt Levine for feedback on how well their pieces achieve the intended benchmarks. The process is meant to mimic the real-world demands of a professional composer. After refining their scores, students record and mix their demos at SFCM, and this year, received input from legendary video game producer Sam Marshall, lead mixing engineer Anthony Caruso, and senior music engineer Marc Senesac.

The top 10 demo tracks are selected to be professionally recorded outside SFCM; if time permits, more are added. Typically, the entire class piles into a bus and makes the short journey across the bay to Sony’s headquarters in San Mateo to record in person, but with an ongoing global pandemic, the class had to pivot. This year, a remote recording session with Castle Recording Studios near Nashville, Tenn. was organized by Alan Umstead, a veteran studio concertmaster and scoring contractor.

“The remote approach is actually an opportunity to get a glimpse into perhaps how the recording industry might be shifting right now,” says Barrera. “It was pretty seamless and is probably going to persist after the pandemic as a way that these sorts of projects get realized.”

An all-day Zoom meeting was scheduled and students tuned in from around the world. “It was pretty unique and very special and the results of the recordings are just stunning,” says Barrera. 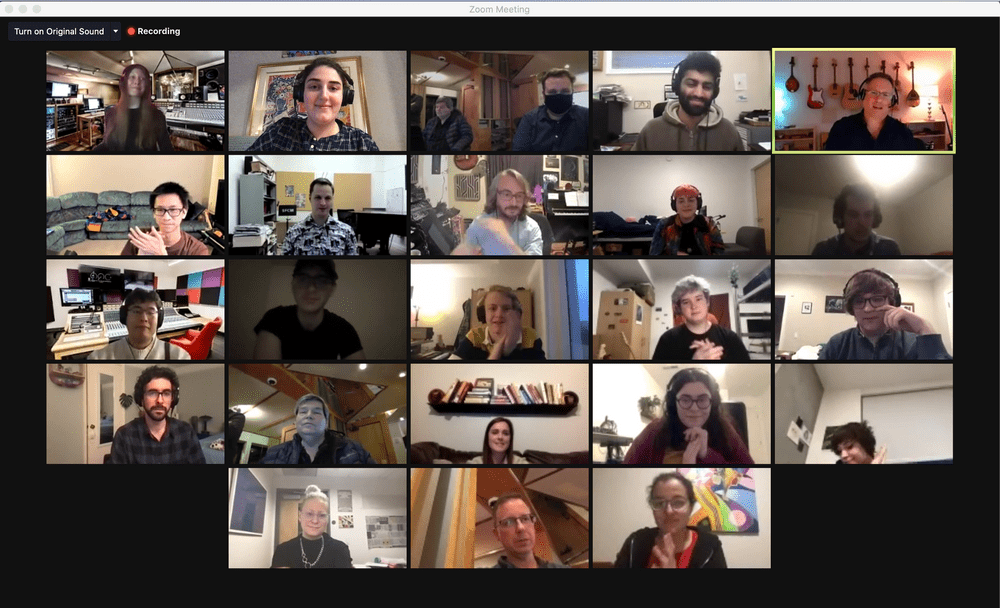 Yazmin counts the recording opportunity as one of the highlights of her career. “I was literally speechless the first time they played through my piece,” she recalls. “I have recorded myself singing or playing before, but this was a whole new level to see absolutely incredible musicians totally bring my piece to life. I was in quiet awe the first time it went through.”

Following the outside recording, the demos were brought back to SFCM for final post-production. David Tippie (BM ’23) was tapped to help with the post-production mixing. Tippie took the students’ edited and recorded tracks and mixed in the original stems and live instrument recordings, comparing the sound to the designated reference track and working to make the scores sonically seamless. “I was pretty happy when Taurin asked me to mix the Sony projects,” says Tippie, who also works in recording services for SFCM, and has recorded and mixed three of his own Sony project demos. “Eventually, I would like to do some mixing and studio recording engineering as a profession.”

After her positive first semester experience, Yazmin enrolled in the composition workshop course again for the spring semester. The game is the same, but this time, students must all compose for the main theme. “It’s such an awesome experience to just listen and see where people each go with this emotional map,” she says. “I think it’s also helped me find my own musical voice.”