The celebrated St. Lawrence String Quartet (SLSQ) joins SFCM's Ensemble-in-Residence, The Telegraph Quartet, for a shared recital, culminating in both quartets performing the world premiere of Osvaldo Golijov's Ever Yours.

Osvaldo Golijov (b. 1960)
Ever Yours for String Octet
St. Lawrence String Quartet and Telegraph Quartet

Ever Yours is a co-commission by the San Francisco Conservatory of Music, the String Quartet Biennale Amsterdam, and the Clarice Smith Center at the University of Maryland at Columbia. 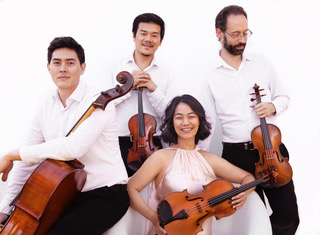 The Telegraph Quartet (Eric Chin and Joseph Maile, violins; Pei-Ling Lin, viola;Jeremiah Shaw, cello) formed in 2013 with an equal passion for standard and contemporary chamber music repertoire. Described by the San Francisco Chronicle as “...an incredibly valuable addition to the cultural landscape” and “powerfully adept ... with a combination of brilliance and subtlety,” the Telegraph Quartet was awarded the prestigious 2016 Walter W. Naumburg Chamber Music Award and the Grand Prize at the 2014 Fischoff Chamber Music Competition.

The Quartet has performed in New York City’s Carnegie Hall and Lincoln Center, San Francisco’s Herbst Theatre, the San Francisco Conservatory of Music’s Chamber Masters Series, and at festivals including the Chautauqua Institute, Kneisel Hall Chamber Music Festival, and the Emilia Romagna Festival. They have collaborated with pianists Leon Fleisher and Simone Dinnerstein; cellists Norman Fischer and Bonnie Hampton; violinist Ian Swensen; composer-vocalist Theo Bleckmann; and the Henschel Quartett. A fervent champion of 20th- and 21st-century repertoire, the Telegraph Quartet has premiered works by John Harbison, Robert Sirota, and Richard Festinger. In 2018 the Quartet released its debut album, Into the Light, featuring works by Anton Webern, Benjamin Britten, and Leon Kirchner on the Centaur label.

Based in the San Francisco Bay Area, the Quartet is currently on the chamber music faculty at the San Francisco Conservatory of Music as the Quartet-in-Residence and has given master classes at the SFCM Collegiate and Pre-College Divisions, through the Morrison Artist Series at San Francisco State University, and abroad at the Taipei National University of the Arts, National Taiwan Normal University, and in San Miguel de Allende, Mexico. Telegraph has also served as artists-in-residence at the Interlochen Adult Chamber Music Camp, SoCal Chamber Music Workshop, and Crowden Music Center Chamber Music Workshop. In November 2020, the Telegraph Quartet launched ChamberFEAST!, a chamber music workshop in Taiwan. 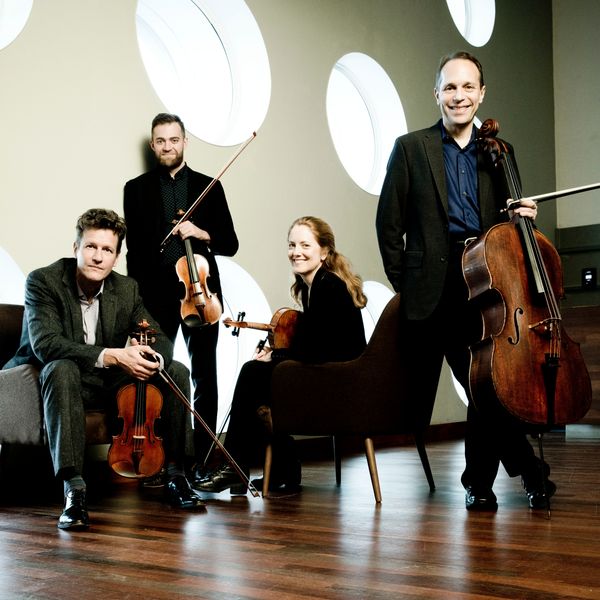 “Modern,” “dramatic,” “superb,” “wickedly attentive,” “with a hint of rock 'n roll energy” are just a few ways critics describe the musical phenomenon that is the St. Lawrence String Quartet (SLSQ). The Quartet is renowned for the intensity of its performances, its breadth of repertoire, and its commitment to concert experiences that are at once intellectually exciting and emotionally alive. Established in Toronto in 1989, SLSQ quickly earned acclaim at top international chamber music competitions and was soon playing hundreds of concerts per year worldwide. It established an ongoing residency at Spoleto Festival USA, made prize-winning recordings for EMI of music by Schumann, Tchaikovsky, and Golijov, earning two Grammy nominations and a host of other prizes before being appointed ensemble-in-residence at Stanford University in 1998.

SLSQ is thrilled to announce a new creation and a unique collaborative venture for the 2021-22 season: an octet for strings by the renowned composer Osvaldo Golijov. The new work offers presenters an opportunity to foster an unusual collaboration and connection between the St. Lawrence and four locally based “solo" string players (two violins, viola, cello), who may in fact be soloists, orchestral section leaders, or exceptionally talented conservatory or university students. In Golijov’s own words, the work will "explore the dimensions opened by combining an organism with its own breathing and metabolism, like a string quartet, (especially one that is "mature" as SLSQ) together with four individual players that come to orbit, interact, and disrupt this organism.”

In recent years, the St. Lawrence has collaborated with Michael Tilson Thomas and the SF Symphony, Gustavo Dudamel and the LA Philharmonic and Marin Alsop and the Baltimore Symphony in John Adams's Absolute Jest for string quartet and orchestra. Fiercely committed to collaboration with living composers, SLSQ's fruitful partnership with Adams, Golijov, Jonathan Berger, and many others has yielded some of the finest additions to contemporary quartet literature.

Geoff Nuttall (violin) and Lesley Robertson (viola) met as students while studying music in their native Canada and in 1989 founded  the St. Lawrence String Quartet. Christopher Costanza (cello) joined the ensemble in 2003 after performing for many years with the Chicago String Quartet. Owen Dalby (violin) is a founding member of Decoda, the Affiliate Ensemble of Carnegie Hall. He joined the SLSQ in 2015.

Osvaldo Golijov was born in 1960 in La Plata, Argentina, to a family of eastern European Jewish origin. He grew up surrounded by classical chamber music, Jewish liturgical music, the sounds of eastern European klezmorim, and the new tango of Astor Piazzolla. He studied piano at the local conservatory, and composition privately with Gerardo Gandini (b. 1936), a pupil of Argentina's most famous composer, Alberto Ginastera. After living in Israel for three years, where he studied at the Rubin Academy in Jerusalem, Golijov emigrated to the United States in 1986 and earned his Ph.D. at the University of Pennsylvania.
In 1990, as a fellow at the Tanglewood Music Center, Golijov received a Fromm Foundation Commission, for which he wrote his work Yiddishbuk. It was premiered in 1992 by the St. Lawrence String Quartet during Tanglewood's Festival of Contemporary Music. Golijov regards that collaboration as a turning point in his musical life, and the St. Lawrence Quartet has remained among the most important exponents of his works. Also at Tanglewood he became acquainted with the Kronos Quartet. Their working relationship has become a central one to the composer, who has collaborated with the quartet on some 30 pieces. Like the St. Lawrence, the Kronos Quartet has also recorded many of Golijov's compositions. Its CD of his work on a Jewish legendThe Dreams and Prayers of Isaac the Blind (1994), with clarinetist David Krakauerbecame a classical best-seller. Golijov's association with the Kronos Quartet also led him to work with the Romanian Gypsy band Taraf de Hadouks, which participated in the recording of his sound track for the film The Man Who Cried (2000); as well as with the Mexican rock band Caf Tacuba; tabla virtuoso Zakir Hussain; and the celebrated Argentine rock musician and producer Gustavo Santaolalla.

In 1995 Helmuth Rilling invited Golijov to compose a work for the Oregon Bach Festival. The success of Oceana, a "Latin American cantata" on texts by Chilean poet Pablo Neruda, brought another commission from Rilling for Golijov's setting of the Christian Passion, for which he drew upon his own experience as a Jew living in an officially Roman Catholic country. The work was intended for performance at a festival commemorating both the millennium and the 250th anniversary of Bach's death. La Pasin segn San Marcos (The Passion According to St. Mark) had its triumphant world premiere in Stuttgart in 2000 at the European Music Festival. After its equally successful North American premiere in 2001 at Boston's Symphony Hall, with the Boston Symphony Orchestra conducted by Robert Spano, The New Yorker's music critic, Alex Ross, declared, "Any work that causes hysteria in both Boston and Stuttgart is worth a close look. Pasin drops like a bomb on the belief that classical music is an exclusively European art."