Ramón Sender Barayón ’62 was the guest of honor at this year’s Fanfare Luncheon, an annual event honoring one alumnus who has made significant contributions to music and the SFCM community. Sender, known for building SFCM’s first electronic music studio (that would later become the San Francisco Tape Music Center) in the 1960s, is a composer of international renown and a contemporary of Terry Riley, Pauline Oliveros, and others known for their experimental and minimalist works.

In an unusual move, this year’s Fanfare began before the actual luncheon on Friday, March 8. SFCM joined with the California Academy of Sciences to present Sender’s Tropical Fish Opera the day before. The rarely performed work was played by a quartet of SFCM students—Shaina Pan ’20, Kay Nakazawa ’20, Natalia Badziak ’19, and Nicholas Denton-Protsack ’19—in the Steinhart Aquarium.

Looking at a music staff made of tape stuck to the glass fish tank, the musicians saw the fish as notes, moving up and down the staff to determine pitch and going away and coming close to indicate dynamics, a sort of three-dimensional interactive score.

A few spectators, anticipating the experimental nature of a work involving live fish, were excited to see this piece come to life.

“This is exactly what I expected,” said SFCM student Nicole Murray ’19, in attendance at the event. “When the fish dart across the tank, it’s kind of cool to hear it go from person to person.”

Some viewers were struck by how beautiful the music could be, while, in effect, the sounds are determined by chance—or fishy inclinations. 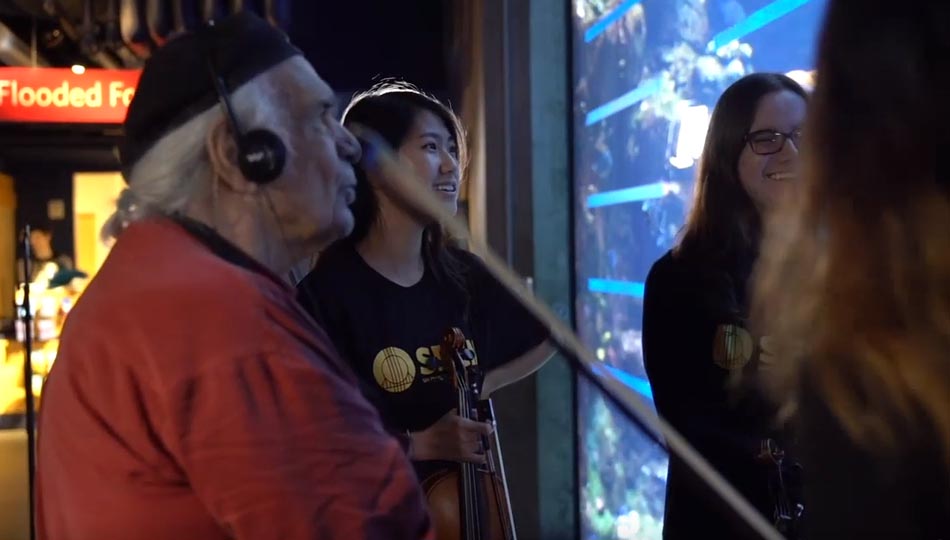 “To be quite honest, I’m surprised how nice it sounds,” commented Jessica Mao ’20. “It’s really harmonious and a really interesting idea.”

“I was expecting it to sound much more experimental than it did,” commented the cellist Nicholas Denton-Protsack. “There were moments where it sounded very sonorous, like it had been written out. It was very interesting to see how that happened naturally.”

Luncheon attendees who weren’t at the Tropical Fish Opera were able to see what the excitement was all about the following day. Since the event was filmed, a short video of the presentation was shown on the stage of SFCM’s Caroline H. Hume Concert, where the luncheon took place.

Chaired by SFCM trustee Eileen Blum and honorary doctorate recipient Terry Riley ’15, the Fanfare Luncheon was the perfect venue to honor Sender, as he was surrounded by SFCM alumni, artists, and community members. Pre-College pianist Charlotte Wong performed Granados’ Goyesca No. 1 and collegiate pianist Jung-eun Kim ’20 performed Chopin’s Nocturne in B major for the guests.

Riley sat down with Sender on stage, conversing about the Conservatory in the 1960s and what his early life as a composer was like in the Bay Area. Sender recalled his enterprising spirit from those days, telling how he began the “Sonics” concert series in SFCM’s attic when the Conservatory was still located on Ortega Street.

“It started one night with me with a coal chisel in one hand and a hammer in the other chiseling holes into the concrete to put in wooden plugs so that I could hammer down a 2x4 as the bottom plate of a wall, and then build a wall to isolate one section of the attic as an electronic music studio.”

He didn’t know at the time that that action was the catalyst for a daring and radical approach to music that defined a generation of composers. Minimalism and experimental electronic music thrived at the Tape Music Center, and it all started with Sender chiseling away at some concrete one night.

Peppered with funny remembrances and discussion that ranged from emotional to lighthearted, the Fanfare Luncheon lived up to its reputation as a celebratory event. Wrapping up, Presidential Alumni Council Chair Gary Rust ’83 presented Sender with SFCM’s Distinguished Alumni Award. The long applause indicated that his life’s work and his story had an impact on SFCM’s community of alumni, students, and supporters.