George Gershwin transc. Jascha Heifetz
"It Ain't Neccessarily So"
from Porgy and Bess 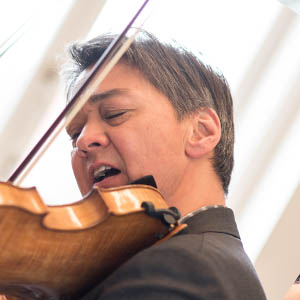 Ian Swensen, violin
A native of New York, violinist Ian Swensen comes from a musically gifted family of Norwegian and Japanese-Hawaiian descent. He has lived in the Bay Area for over 20 years, teaching at the San Francisco Conservatory of Music and Sacramento State University. He is a passionate pedagogue and his students have gone on to major positions in orchestras, teaching institutions and chamber groups around the world.

Swensen also maintains an active schedule as soloist and chamber musician, appearing at Music@Menlo, the Chamber Music Society of Lincoln Center, the Smithsonian Chamber Music Society and others. Recent projects include a series of recitals with pianist Jeffrey LaDeur, Stravinsky’s L’Histoire du Soldat with members of the San Francisco Symphony and a series of Haydn trios with Kenneth Slowik on fortepiano. Over the years other engagements have included Santa Fe Chamber Music Festival, the Spoleto Festival of Two Worlds, Music from Marlboro, residencies at Tanglewood, Banff, Morningside Music Bridge in Calgary and travels to Asia, Europe, Australia and New Zealand to teach and perform. He has performed with members of the Juilliard, Cleveland, Emerson, Takács, Concord and Tokyo quartets, as well as Menahem Pressler, Gilbert Kalish, Mark O'Connor and Yo-Yo Ma.

Ms. Zhang received her bachelor degree at UT Austin and master degree and doctoral degree in collaborative piano from Manhattan School of Music in 2007. She studied with Professor Junwei Zhang (her grandfather) and Professor Shizhen Yao at Shanghai Conservatory, Dr. William Race at UT Austin and Dr. Heasook Rhee at Manhattan School of Music.  In 2008, Ms. Zhang became faculty at the Shanghai Conservatory of Music teaching piano solo and chamber music.